Harry Hughes of Portwest named EY Entrepreneur of the Year 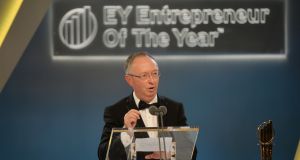 As the overall winner, Harry Hughes will now go on to represent Ireland at the World Entrepreneur of the Year Awards in Monte Carlo next June. Photograph: Alan Betson / The Irish Times

The speciality clothing company which Mr Hughes runs with his brothers Cathal and Owen, was founded in 1904. Headquartered in Westport, it designs and manufactures personal protective equipment, workwear and outdoor leisurewear that is sold in more than 100 countries worldwide.

“I had no idea we would win. This is a total shock for me,” said Mr Hughes.

“It is a big win for Mayo but also a big win for all family businesses. It gives them the opportunity to see they can build a business that can export and grow.”

“We are looking at turning over €180 million this year and are busy putting in the infrastructure in place to continue to grow. It gives us great pride that we can create jobs in the west of Ireland and I would hope others can see it can be done,” he added.

Just last week the company announced its second acquisition in Australia in less than a year. The firm currently employs more than 2,000 people globally.

Mr Hughes received the prestigious EY Entrepreneur of the Year award at a gala event in Dublin on Thursday, attended by more than 1,500 business leaders.

In addition to being selected as the overall winner, he also scooped top honours in the Best International Entrepreneur category.

Anne Heraty, chairwoman of this year’s judging panel, described Mr Hughes as a “visionary leader who has built a world-class businesses”.

“Harry personifies the entrepreneurial spirit and is a role model for any aspiring entrepreneur,” she said.

The 24 finalists for the 2017 final collectively employ over 5,200 people and last year generated revenues of more than €477 million.

Evelyn O’Toole, founder of Complete Lab Solutions (CLS), the largest privately owned contract laboratory in the country, was named EY Industry Entrepreneur of the Year. CLS, which employs 110 staff and has an annual turnover of €7.2 million, provides sampling, analysis and fully trained micro and analytical analysts to clients in the food, environmental, medical device and pharmaceutical industries.

Jack Teeling, founder and chief executive of Teeling Whiskey, picked up the award for EY Emerging Entrepreneur of the Year. The Teeling family opened the first whiskey distillery in Dublin over 125 years and sales of the company’s drinks increased 37 per cent in 2016 to €12.2 million.

Iseult Ward and Aoibheann O’Brien, co-founders of Food Cloud, received this year’s special award for their contribution in helping to divert more than 18 million meals from landfill to charities.

As the overall winner, Mr Hughes will now go on to represent Ireland at the World Entrepreneur of the Year Awards in Monte Carlo next June, where he will compete with more than 60 leading entrepreneurs from across the globe.

“Harry Hughes, his brothers and the team at Portwest have cultivated a world-beating company from the west of Ireland. We are looking forward to seeing how far Portwest can go as Harry’s plans for the future unfold,” said Kevin McLoughlin, lead partner for the EY Entrepreneur of the Year awards.

The other finalists in the international category were: Mark Barrett of APC; Darragh Cullen of Edge Innovate; Brendan Monaghan of Neueda; Fergus and Frances McArdle of Height for Hire; Jane Gallagher and Roisin Callaghan of Cogs and Marvels; Kevin O’Loughlin of Nostra; and Alan Foy of Blueface.

1 Race against time: The inside story of Ireland’s Covid Tracker app
2 EU court rejects data transfer arrangement with US
3 Blockbuster Schrems decision to impact nearly every business
4 State gets €8.8m EU grant to study Dart expansion into Kildare
5 Dublin City Council brings new challenge to Ronan dockland tower
6 Ryanair and Aer Lingus cut flights as travel restrictions continue
7 The 7 key things the Government has to consider to jump start a recovery
8 ‘I set up an investment club many years ago with a bunch of friends’
9 UK developer gets green light for 245 new homes in Lucan
10 Ireland wins appeal in €13 billion Apple tax case
Real news has value SUBSCRIBE