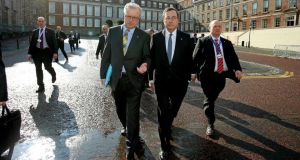 EU economics commissioner Olli Rehn (left) with European Central Bank president Mario Draghi pictured in Dublin for an Ecofin meeting over the weekend. Mr Draghi said the ECB was determined funds injected would ‘find their way through the economy to financing to the real sector’. Photograph: Julien Behal/PA Wire

A two-year slump, 19 million unemployed and five countries on emergency aid are no reason to take bold, immediate action to spur economic growth, according to European officials set to defend their handling of the debt crisis in Washington this week.

Shrugging off the US Federal Reserve's stimulus and the Bank of Japan's reflation campaign, Europe's economic managers say they are on the right track in propping up the 17-nation euro zone, even if evidence is taking time to filter through.

"The euro area has made further progress in the implementation of its comprehensive crisis-response strategy," European Union officials will tell the Group of 20 finance ministers this week, according to a draft statement obtained by Bloomberg News at an EU meeting in Dublin two days ago.

That message is unlikely to find many believers at the economic policy gatherings in Washington, which start Thursday. US treasury secretary Jacob J Lew appealed last week for a European growth offensive, and International Monetary Fund managing director Christine Lagarde warned of a "three-speed" global economy, with Europe stuck in the lowest gear.

Europe's own forecasts tell the tale. The euro-zone economy will shrink 0.3 per cent in 2013, while the US expands 1.9 per cent and Japan grows 1 per cent, the European Commission predicted on February 22nd. The IMF will release its latest economic outlook tomorrow.

The European debt crisis has forced the region to revise policies and public finances and strengthen economic and monetary union "in a way that we were unable -- in some cases unwilling -- to do before," he said.

Europe's subpar performance isn't preventing it from parceling out advice to other major economies. The statement pushed the White House and Congress to settle on a "credible medium-term fiscal consolidation plan" and warned that Japan risks getting hooked on monetary and fiscal stimulus in the wake of the central bank's April 4th move to double the monetary base by the end of 2014.

To be sure, the European G-20 statement contained self- criticism as well. It acknowledged that "the situation remains fragile" and said a slew of reforms -- budget cuts in debt- strapped countries, deregulation, and the setup of a euro-area bank supervisor -- need to go ahead in order to extricate the economy.

Finance ministers in Dublin fixed some past crisis- management mistakes, by granting Ireland and Portugal seven more years to pay back bailout loans. The delay will save both countries money that they can use to obtain market financing instead, enabling Europe's crisis managers to present them as success stories.

The concession was partly driven by the need to restore confidence after the controversy over the aid package for Cyprus. A first plan on March 16th dented confidence in European deposit insurance by siphoning money out of Cypriot bank accounts including those insured up to €100,000.

A week later, a final package spared the insured depositors and shut Cyprus's second-largest bank. Finance ministers signed off on the Cyprus terms in Dublin, concluding an episode that exposed the tensions between northern creditor countries and southern debtor countries that beset European economic governance after three years of wrangling over the debt crisis.

Politically stalemated Italy is benefiting from the easing of market tensions. Italy's extra 10-year borrowing costs over German levels were 288 basis points on the eve of the February election that produced no clear winner. The spread peaked at 351 basis points on March 27 before falling back to 306 basis points last week, even though Italy remains without a full-time government.

Another election, this time for a successor to the mostly ceremonial president, Giorgio Napolitano, starts as soon as Thursday, potentially adding to the instability.

European finance officials heard a range of growth-boosting recommendations from analysts at the Bruegel research institute at the Dublin meeting. Bruegel's most controversial plea was for Germany, the cradle of the euro's low-inflation policies, to aim for an inflation rate of over 2 per cent to save southern countries from the economy-crunching specter of disinflation or outright falling prices at a time when the overall unemployment rate in the euro area is at a record 12 per cent. German inflation was 1.8 per cent in March.

In Greece, at the origins of the debt crisis, prices were 0.2 per cent lower than a year earlier. A higher German number would lessen the squeeze on the south and still keep the euro zone's overall inflation below 2 per cent, Bruegel reasoned, taking on a decades-old German mindset.

Euro-area inflation was 1.7 per cent in March. European Central Bank President Mario Draghi said that with interest rates at an all-time low of 0.75 per cent, there's more than enough money sloshing around in the economy.

The problem, he said, is getting it to the companies and consumers who need it, especially on the Mediterranean rim.

“We are clearly determined to make sure that all the funds that have been injected into the economy don't simply stop in terms of liquidity, but find their way through the economy to financing to the real sector," Mr Draghi said in Dublin. "We will continue working on that."

The Brussels-based group Bruegel had a proposal there as well, calling on the ECB to loosen collateral rules for bank lending to small and medium-sized companies. Such a scheme might need to be coordinated with governments and regulators, perhaps with the European Investment Bank covering any ECB losses.

Mr Draghi might touch on a stepped-up lending program when he testifies tomorrow to the European Parliament in Strasbourg, France. A draft parliamentary resolution said that "policies to foster growth and job creation must be a key priority for the union," without explicitly calling on the ECB to aid growth.