Wordpress gets 17 days to identify author of Petroceltic blog 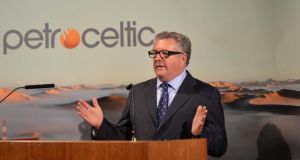 Automattic, the Californian company behind the popular Wordpress blogging system, has been given 17 days by the High Court to identify the author of an anonymous blog it hosts that attacks the management of exploration company Petroceltic International.

Petroceltic and its two most senior managers, chief executive Brian O’Cathain and finance director Tom Hickey, also got a High Court order to have the allegedly defamatory content taken down.

The orders were sought against Aut O’Mattic A8C Ireland, a local unit of the Wordpress owner, while its US parent was also joined to the case.

At the time of going to press, the material, which makes a range of serious accusations of malpractice and fraud against Petroceltic, its advisors and board, was still online.

Petroceltic has denied all of the accusations, which it says it investigated and found to be “entirely baseless, untrue and defamatory”. It is not possible to repeat precise details of the claims for legal reasons.

Ms Justice Marie Baker yesterday gave an order giving seven days for the anonymous author to identify themselves to Automattic. Following this, the US company has a further 10 days to identify the blog author from its own records.

Worldview Capital, a Swiss fund that is Petroceltic’s biggest shareholder and is involved in a bitter dispute with its management, released a statement to the London Stock Exchange yesterday, following an Irish Times story highlighting Petroceltic’s attempts to remove the blog.

Worldview called for clarity surrounding the issues raised in the blog, which included a suggestion – strongly denied by Petroceltic – that a company executive may have benefitted from a contract awarded by Petroceltic in Algeria.

The statement was signed by Aneglo Moskov, the founder of Worldview who previously sought election to Petroceltic’s board in February, although this was rejected by shareholders.

The Worldview statement was followed by a reply from Petroceltic, again denying the blog’s contents and promising to sue the accuser unless he or she could provide any evidence to back up their claims.

The blog first emerged last month with a posting threatening to “expose” alleged wrongdoing at the company. The author followed this up with emails to people highlighting the existence of the blog.

Prior to the court case, Petroceltic had asked Automattic to provide it with the identity of the blogger. Paul Sieminsk, Automattic’s general counsel, has previously said it does not turn over such information unless ordered to do so by a court.

Fergal Crehan, a high-profile barrister and online privacy expert who runs the Hit Team online consultancy, said a court order is sometimes only the “first layer of the onion”.

He said Automattic’s ability to identify the author would depend upon what level of identification it had originally sought. Petroceltic’s lawyers said Automattic must be aware of the identity of the blogger, because it appeared to have taken payment, as there were no ads on the blog.