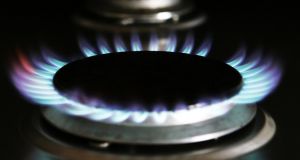 Day-ahead prices for natural gas averaged 47.6 pence sterling a therm in February, down 18 per cent on the previous month. Photograph: Andrew Milligan/PA

The Naturgy Energy Review and Forecast shows that wholesale gas prices fell 18 per cent last month from January’s levels, while electricity prices were 31 per cent down.

Warmer than normal weather in February contributed to the fall in the wholesale prices of gas and electricity as demand for both was lower than usual.

Naturgy points out that there was also an oversupply of natural gas last month. At the same time, cheaper renewable-generated electricity accounted for 47 per cent of the electricity generated in Ireland in February.

The company, an independent energy supplier, believes that prices will remain low this month.

“While energy prices and in particular gas prices have shown significant growth up to year end 2018, we predict the outlook on prices for March to remain bearish with mild weather set to continue and security of supply continuing, due to liquid natural gas deliveries expected in the UK,” said energy analyst Lauren Stewart.

Day-ahead prices for natural gas averaged 47.6 pence sterling a therm (the unit in which the fuel is traded) in February, down 18 per cent on the previous month, Naturgy said.

Seasonal contracts for natural gas supplies in summer and winter 2019 were also down.

Day-ahead prices for electricity fell to 2.76 cent a kilowatt hour, their lowest since the introduction of a new market in October, on February 17th.