UrbanVolt intends to install solar panels on client companies’ rooftops, financing and maintaining the equipment itself 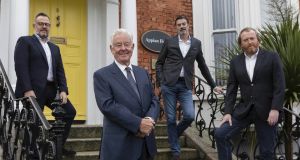 UrbanVolt, an energy company backed by the State and former commercial property magnate Stephen Vernon, plans to supply solar electricity to businesses at 30 per cent discounts.

The company said it intends to install solar panels on client companies’ rooftops, financing and maintaining the equipment itself.

UrbanVolt will sell the electricty to the companies for 10 cent a kilowatt hour (KW hour), compared to the 15 cent to 20 cent a KW hour that the company says other suppliers charge.

The company will guarantee the electricity price for 25 years, which it maintains will protect businesses against future energy cost hikes.

Kevin Maughan, UrbanVolt’s chief executive, said the plan would save customers money. “But the real value is that it enables businesses to take direct action to reduce their carbon footprint.”

UrbanVolt began life in 2015, supplying energy-saving lighting equipment to businesses. Instead of charging upfront for the equipment, which is expensive, the company instead takes a share of the cash that its customers save on their electricity bills as payment over time.

UrbanVolt has since expanded to Europe and the US. Customers include Dutch brewer Heineken, pharmaceutical giant and Covid vaccine maker Pfizer, medical device manufacturer Zimmer Biomet, and transport and logistics business Syncreon.

The company raised €7 million in October from backers including former Green Reit co-founder Mr Vernon, who chairs UrbanVolt’s board, and the State’s Ireland Strategic Investment Fund.

Mr Maughan argued that the company’s move into solar power would appeal to businesses “frustrated” by waiting for energy suppliers to move on with the climate-change agenda.

“Businesses in Ireland have been overcharged and undervalued by the traditional energy companies for too long,” he said.