Lifting of US sanctions boosts profits at Aughinish Alumina

Revenues decline but profits up over 30% to $54.6m at Russian-owned Limerick refinery 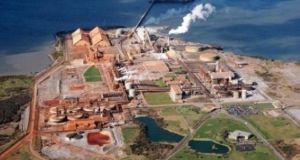 The US sanctions, imposed by the US Department of Treasury on the refinery’s owner the Rusal Group in 2018, were waived in late January 2019

Pre-tax profits rose by over 30 per cent to $54.6 million (€45.7 million) at the Aughinish Alumina refinery in 2019, as the company benefitted from the lifting of US sanctions against its Russian owner early in the year.

The US sanctions, imposed by the US Department of Treasury on the refinery’s owner the Rusal Group in 2018, were waived in late January 2019.

The refinery was also in the news last year after Ireland lost a state aid appeal over a European Commission ruling that Aughinish Alumina plant received €10 million in illegal tax breaks between 2002 and 2004 through an exemption from excise duty for heavy mineral oil used to produce aluminium.

The main activity of the Shannon estuary-based refinery is the production and sale of alumina, which is extracted at the plant from bauxite and then exported outside the EU for further processing to aluminium metal.

The plant is the largest in Europe and provides about 30 per cent of the EU’s alumina, much of which is used for aluminium in the car and aeronautical sectors.

Rusal has previously said it regards the plant as a “major asset” and last year announced plans to invest further in the facility. Newly filed accounts for Limerick Alumina Refining Limited reveal the parent put additional funds into the business recently in a move to replace third party-supplied bauxite with owner-supplied bauxite.

“This significant development will help sustain the business in the long term,” company directors said.

The company said the refinery continued to operate during the Covid-19 crisis as permitted by the Irish Government with no impact on output during the period.