Opinion: It’s simple – if you’ve been in charge during a major screw-up you don’t get promoted 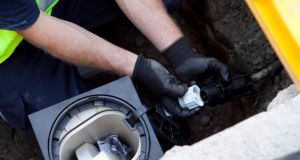 The first water meter being installed in Maynooth, Co Kildare. But is executive performance being properly measured? Photograph: Colm Mahady/Fennells

The State lacks many things but a sense of humour is not one of them. Just as the head of Irish Water John Tierney was dropping the news that he had spent €50 million on consultants, Brendan Howlin was advertising for submissions to a consultation process on accountability for senior public servants, to “help build trust among citizens that effective and well-informed choices are being made as to how taxpayers’ money is spent”. The comic timing is exquisite.

So here’s my submission to the consultation process: if there were accountability for senior public officials, John Tierney would never have been appointed as managing director of Irish Water. It’s not a complicated rule: if you are in charge of a major screw-up, you shouldn’t get promoted. John Tierney was Dublin city manager from 2006 until last April. On his watch, we had one of the most egregious failures in the recent history of Irish local government: the almighty debacle of the Poolbeg incinerator. The handling of key parts of this project, involving close to €100 million, has been damned by the local government audit service (LGAS) and by the European Commission.

No detailed budgets
The LGAS report on spending by Dublin City Council for 2011 includes a special appendix on the Poolbeg project. It raises very serious concerns about the controls that were exercised in the spending of €80 million of public money (the cost has since risen to over €95 million): “it is evident that the financial management, as part of project management by the Environment and Engineering Department for this project, has been weak. There needed to be evidence of much more comprehensive oversight in monitoring and controlling expenditure. No proper classification of expenditure on an invoice basis was available to account for monies spent on this project at the initial audit stage (April 2012) . . . The lack of financial reports . . . indicated that the financial control procedures in place were not adequate for such a project. There is no evidence of monitoring of detailed budgets or financial forecasts tied into project schedules or that detailed monthly/quarterly reports were examined to control expenditure apart from client representative summary reports and cumulative cost centre reports presented to Dublin City Council Management. It is also noted that the Project Executive Board did not meet on a formal basis and therefore no minutes of meetings were retained.” To summarise: with €80 million of our money at stake, no adequate monitoring of detailed budgets and no minutes of board meetings.

Unlawful spend
One aspect of this lax control is especially relevant to Irish Water: a ballooning and unlawful spend on consultants. The project became a bonanza for a company called RPS Ireland. It was hired in 2001 to provide “client representative” and PR services, long before John Tierney became city manager. But the gold rush continued under his reign. RPS’s contracts in 2001 were for €8.32 million. By the end of 2011, it had been paid €28.44 million, which subsequently rose to €32 million. This includes, for example, €686,344 for “miscellaneous”, €1.9 million for “expenses” and €3 million for “public relations”.

This spending wasn’t just badly monitored, it was unlawful. By 2005, shortly before John Tierney took over, RPS was already receiving over 50 per cent more money than it had contracted for. When this happens, procurement guidelines demand that the contract has to be readvertised. This was not done. Effectively, RPS was awarded an additional contract worth €24 million without any public tendering process.

The European Commission, acting on a complaint from two citizens, Joe McCarthy and Valerie Jennings, found that this created an “illegal situation”.

The building of a replacement terminal for a firm that had to move to accommodate the incinerator was contracted at €11.9 million but the council under John Tierney paid €22 million. But the deal that RPS got is breathtaking in one specific respect: RPS, as a major beneficiary of the project, was also contracted to manage the project’s finances. It was in charge of managing its own expenditure. Even more wonderfully, it seems that one of the things we paid RPS for was defending the awarding of its own unadvertised contracts. Tierney told the LGAS that: “complaints to the Competition Authority and the EU Commission have all required the experience of the Client Representative [RPS] to prepare the responses.”

Damning report
The damning LGAS report was published in November 2012. John Tierney was appointed head of Irish Water in January 2013. Two of his key appointments for his new team at Irish Water had previously worked for RPS. Irish Water’s head of asset management Jerry Grant was managing director of RPS until August 2012. Its head of corporate services Elizabeth Arnett held the same position at RPS until December 2012. John Tierney has stressed that they were appointed through an “open recruitment” process.