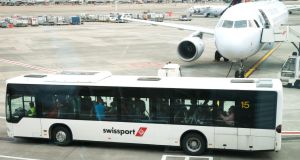 The Irish arm of international airport ground handler Swissport has been hit with a €24,000 fine after it pleaded guilty to using “green diesel” at its Shannon airport operation.

At Ennis District Court, Judge Patrick Durcan said that Swissport Ireland Ltd was engaged “in a practice that was costing the Irish taxpayer a considerable amount of money – there would be a huge loss of revenue to the Irish exchequer”.

Judge Durcan said that the practise by Swissport Ireland in using marked gas oil could have been going on for years, and the loss to the Irish State “must run into very considerable sums of money”.

The solicitor for Swissport Ireland, John Casey, said that the use of the green diesel on November 2nd, 2017, “was not intentional”, and the company had taken steps to make it impossible that the fuel would be used again.

Judge Durcan said: “It is all very well to say to that this arose because of a lack of knowledge, lack of training and lack of supervision. I don’t accept any of that quite frankly.”

He made his comments after Swissport Ireland Ltd pleaded guilty to six separate summons concerning the use of marked gas oil in its vehicles on November 2nd, 2017.

Judge Durcan imposed a fine of €4,000 on each of the six summons before the court.