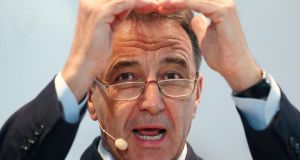 OMV, the biggest central European energy company, paid $2.65 billion (€2bn) to Statoil in its largest deal on record for stakes in four North Sea oil and gas fields as it seeks stable output after disruptions in Libya and Yemen. The deal includes 24 per cent of Statoil’s Gudrun and 19 per cent of its Gullfaks field, and options on 11 exploration licenses, the companies said today in separate statements.

“This deal is positive,” said Raiffeisenbank analyst Oleg Galbur, who recommends investors hold OMV shares. “It ensures a decent return on OMV’s accumulated cash, while clearly following the company’s strategy of focusing on upstream and more stable markets,” he said of its plans for exploration and production.

The deal will increase OMV’s reserves after recent setbacks for the Vienna-based company, with output in Libya and Yemen beset by interruptions from social unrest. Its plan to build a natural-gas pipeline stretching to the Caspian Sea was also shelved in June after Azeri authorities chose a competing offer.

“The Norwegian area is a politically stable area,” OMV chief executive officer Gerhard Roiss said in an interview with Bloomberg television. “The transaction will provide a huge boost to OMV’s strategy and will be a key factor in achieving our 2016 targets”.

Statoil, Norway’s biggest energy company, will use the deal to redeploy about $7 billion of capital expenditures, it said. The company is expanding abroad and moving into unconventional resources such as shale oil and gas to meet targets. “This is a transaction that captures the full value of the assets we are divesting and reducing our ownership in,” chief executive Helge Lund said in a phone interview. “Particularly on Gullfaks and Gudrun in Norway, the deal metrics demonstrate the value of the assets we have on the Norwegian Continental Shelf.”

Statoil has been producing oil from Gullfaks since 1986, while Gudrun is expected to begin production in 2014, according to the company’s website. OMV, which had free cash flow of about €1.6 billion in the first half, said the deal will be largely funded by the sale of downstream assets such as oil processing. The company expects to sell its 45 per cent stake in Bayernoil Raffinerie by next year. Today’s acquisition is the biggest in OMV’s history, surpassing the $2.01 billion it paid in April 2004 to buy Romania’s Petrom SA.

Ireland is 13th most expensive place in the world to live 11:14
New online portal for people seeking to upskill or retrain 09:15
State plans Covid-19 testing for lorry drivers on ferries to France 08:22
China’s economy picked up speed to end 2020 in solid shape 08:12
Employers cautiously optimistic about 2021, recruitment survey finds 07:48

7 High levels of public investment to be maintained for coming years, Donohoe says