Michelle and Sandy Mbaya have brought solar energy to Brazzaville 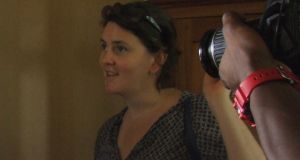 Michelle Mbaya: “You have to learn to live with poverty because in the beginning, it affects you deeply to see people who are crying because their children are sick.”

Donning an over-sized shirt and jeans, sunglasses pushed back on her head, Michelle Mbaya flits between English and French as she translates for the nun standing next to her. She is talking about the impact of the solar panel-powered fridge Mbaya and her company, Africa Solaire, installed in a small health centre in the capital of Congo.

The nun, one of the leaders of the health centre, talks enthusiastically about the vaccines that can now be stored for the hundreds of parents and their children, who visit the clinic every day.

This is just one of the many sites Mbaya’s firm has visited to install solar-powered kits for fridges, lights and phone chargers since she and her Congolese husband Sandy Mbaya Mayetela set up the small company when they moved to Brazzaville in 2010.

“We’d always been looking for a project to do together,” says Mbaya (37). “I said to Sandy, ‘well, if you want to do something with regards to renewable energy, that’s something we can work on’.”

Mbaya grew up in Drogheda and attended the University of Limerick to do a master’s degree in EU politics. She moved to Brussels to work with multinational companies applying for EU tenders.

Afterwards, she went on to work in communications for the European Commission.

“At the time, I was wondering what I was going to take from the experience,” she says, “but it was great training because now, as a company, we are applying for tenders from organisations like the World Bank. I never imagined that I would one day need that skill for my own company in order to bring electricity to rural regions in Congo.”

Mbaya met her husband-to- be in Brussels in 2000. He had studied in the Belgian capital and was working in cold storage factories, working on ways to keep products such as chocolate and medicines cool.

The pair decided they wanted to move back to Sandy’s home country, but didn’t know what they would do there.

It was during Mbaya’s second trip to Congo in 2008, when she toured the country alone to prepare for the move to Brazzaville, that she was first struck by the lack of access to what Europeans might see as basic amenities, including electricity.

“I started to behave like all the Congolese people, I would carry my phone in my bag and the charger and anywhere there was electricity I would charge my phone,” she recalls.

“I didn’t have access to electricity for maybe three or four days – my phone died and my laptop had run out of battery and so nobody in Europe could contact me. Of course, they were panicked.”

Mbaya learned what a difference such access to electricity could make to people struck by poverty – many of whom have no running water, medicines or lights for their homes at night.

“You have to learn to live with poverty because in the beginning, it affects you deeply to see people who are crying because their children are sick.

“You have to find a way to live with that,” she says, “but we’re here, and the reason Sandy came home is to improve people’s lives, to use what he learned in Europe and to apply it here because there are lots of solutions to problems here, just by using technology that exists.

“One of our clients, a school teacher, said that now when he comes home in the evening, he has light and he can correct the children’s work.”

Still, it has not all been plain sailing for the couple. Mbaya has had to get used to a way of life in Brazzaville that differs starkly from what she is used to in both Ireland and Belgium.

One of those differences came from the long wet season in Congo, where heavy rain on muddy streets means buses can’t always travel their normal routes.

“If it rains, everything stops,” she says. “Everyone stays inside, so when we were employing our first staff, I had to tell them that if it rains, you still have to come to work, and on time. Now I understand more and I’ve learned to be more tolerant, but I tell them they can still come, but have to leave [home] a bit earlier.”

Even so, the business has gone from strength to strength with Africa Solaire now working on bigger projects.

Last year Sandy and the company won a €50,000 prize for entrepreneurship from the Congolese diaspora organisation, RICE.

Offering advice to others from Ireland thinking about making the move to Congo, Mbaya says: “If they imagine, they are going to come and change the world, then they really need to think twice.

“The reality of living here, of seeing poverty, of setting up a business, of the everyday logistics – water, electricity – it’s much tougher than you can imagine.”

Still, she says the “slow slog” was worth it and will help the country and its people. “ They [the Congolese people] need companies that are going to come and champion their needs on a micro level,” she adds.