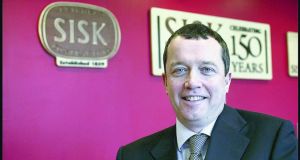 Sisk chief executive Liam Nagle. Directors of the construction group Sisk have said it may take several years in Polish courts before claims from the group’s joint ventures there are resolved. Photograph: Brenda Fitzsimons

The directors of construction group Sisk have conceded that it may take several years in Polish courts before claims from the group’s troubled joint ventures in Poland are resolved.

The group’s joint ventures in Poland contributed to the Sisk group recording pretax losses of €153.2 million last year. The accounts show the group wrote off €83.9 million on its Polish joint venture schemes last year, bringing its losses on the projects to €97 million.

New accounts filed by Sicon Ltd to the Companies Office show the group recorded the loss in spite of revenue increasing by 20 per cent from €972.8 million to €1.171 billion in the 13 months to the end of January 31st, 2012.

The filings also disclose a net loss of €49 million on the sale of the group’s healthcare business. According to the directors’ report, the 13-month period “was a difficult one for the group, particularly in respect of the well-publicised issues which certain joint ventures of the group have experienced in Poland”.

A 50 per cent associate of the group, SRB Civil Engineering Ltd, was awarded contracts for three separate sections of the A1 motorway in Poland. The accounts state the joint venture “was left with little alternative choice but to terminate the other two contracts in September last”.

The directors’ report states the company has incurred significant losses on the projects.

“The directors are of the opinion that there were serious shortcomings and errors in the technical information and specifications contained in the original requests for tender which are the responsibility of the client.”


Legal path
It says the company has engaged specialist lawyers “and the directors will pursue the claims vigorously with the client and will litigate in the courts if that proves necessary”. It notes the directors “are of the opinion that the group has strong entitlement to some recovery of the costs incurred”. However, the directors say it is apparent the client is intent on allowing the matters go for resolution through the courts and “it is likely that the court process in Poland will take several years”.

Revenue in Ireland fell by 7 per cent “which in the circumstances is an extremely solid performance”.

1 Comcast acquires Irish cloud-based telco Blueface
2 Pilita Clark: When a rude boss keeps you waiting, why not walk out?
3 Money matters: ‘My father embarrassed us with his haggling’
4 Henderson Park seek €400m+ for prime Dublin office blocks
5 Five things to watch out for in Apple’s earnings
6 Opioid executive admits to ‘no morals’ ahead of prison term
7 Little strategic thinking in election manifestos of Fine Gael and Fianna Fáil
8 Are there annual limits on inheritances or gifts to a child?
9 NI house builder apologises to Harry and Meghan over adverts
10 US threatens retaliation against EU over proposed carbon tax
Real news has value SUBSCRIBE