Partners in licence understood to have also relinquished holdings 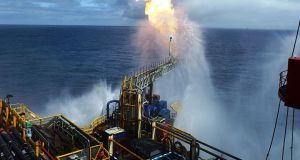 Shell and its partners have handed a petroleum exploration licence for the Rockall Basin back to the State on the grounds that it has no further potential.

In 2005 the Government granted Shell Exploration and Production Ireland ltd (Sepil) and its partners a licence to prospect for oil and gas in an area off the Donegal coast in the Rockall Basin.

The licence was granted shortly after a row over the multinational’s plans to develop the Corrib field off the Mayo coast resulted in the jailing of five men opposed to the project.

Recently lodged results for the company state that at the beginning of last year, it held an interest in licence 2/94 in the Rockall Basin. “However, as the company deemed the licence to have no further potential, Sepil formally relinquished its holding,” the directors’ report says. It is understood that its partners in the licence, including Italian giant Eni, also relinquished their holdings.

The move means that the company, a local subsidiary of global oil business Royal Dutch Shell no longer holds any offshore exploration licences in the Republic’s waters. The then minister for the marine Noel Dempsey issued the permit as part of a round in which his administration granted a number of frontier licences to companies to explore more marginal areas in deeper waters off the Republic’s coast.

Drilling in such areas is expensive and high risk. Shortly after getting the licence, Shell acknowledged that history was against it making a commercial find in the basin.

A number of such rounds followed, but the Corrib field, discovered in 1996, remains the only commercial hydrocarbon find in the State’s territory that is set to be exploited. Gas is due to begin coming ashore in 2015.

Irish exploration group Providence has a significant find in the Barryroe licence off the Cork coast and is in talks with potential partners to develop the field. It hopes work will begin next year. Providence has a stake in a block in which oil giant Exxon drilled last year. Work on that project stopped, but it did find some indications of quantities of oil in the region.