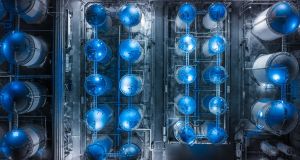 Shannon LNG, now owned by US infrastructure group, New Fortress Energy, intends building a plant in the Shannon Estuary that will convert LNG back to gas. Photograph: iStock

Plans for a liquefied natural gas (LNG) terminal in Shannon face further legal hurdles after a European court found that the Republic was wrong to extend permission for the project without a new environmental impact study.

Lobby group Friends of the Irish Environment is challenging An Bord Pleanála’s decision to extend planning permission for the Shannon LNG terminal by five years to 2023, without a new assessment of its likely impact on the environment.

Juliane Kokott, European Court of Justice advocate general, said on Thursday that An Bord Pleanála should have sought an up-to-date environmental impact study before extending the project’s planning permission.

Her decision means that the case will have to go back to the Irish High Court, which sought the advocate general’s opinion on the issue in the first place.

Ms Kokott pointed out that Shannon LNG originally received permission in 2008, before the EU passed its current Habitats’ Directive. She argued that planners should have first sought up-to-date scientific information on the project’s likely impact before extending permission.

Kerry side of estuary

Shannon LNG, now owned by US infrastructure group, New Fortress Energy, intends building a plant on the Co Kerry side of the Shannon Estuary that will convert LNG back to gas. The facility will then feed the fuel into the Irish natural gas supply network.

The liquefied gas will be shipped in from both the US and Middle East, key suppliers of the fuel. Opponents of the plan argue that north American gas is mainly extracted using a controversial method called fracking, which involves cracking subsurface rock to release gas.

However, the project’s supporters warn that it will be needed for future energy security. Irish gas reserves in the Atlantic and Celtic Sea are running low, but the entire island relies on the fuel to supply 60 per cent of its electricity needs.

In 2017, Shannon LNG’s backers asked An Bord Pleanála to extend permission for the project originally granted in 2008. That was due to expire in 2018 as construction had not begun on the plant.