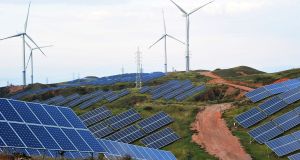 The Government wants renewable power to generate 70 per cent of the electricity used in the Republic by 2030. Photograph: VCG

Irish group Shannon Energy and Danish company Obton plan to kick off a €300 million investment in the Republic by spending €60 million on plants that will generate electricity from solar power.

Shannon and Obton formed a joint venture this year to build solar farms, which use panels of specially manufactured cells to convert the sun’s heat to electricity, around the Republic.

They plan to spend €60 million developing their first 11 solar farms here. The generators will produce 105 mega watts (MW)of electricity, enough to cover the energy consumption of 20,000 homes, the pair say.

The investment will be the first tranche of an overall €300 million that they intend spending on developing solar farms that will produce about 500 MW of electricity at full capacity.

Their plans could employ up to 1,000 people. Shannon and Obton have been in talks with farmers around the Republic to acquire the 2,000 acres they will need for the overall plan.

Work on the first 11 projects could create up to 200 jobs. The solar power plants will be in counties Cork, Galway, Longford, Offaly, Tipperary, Waterford and Wexford.

Shannon Energy and Obton will bid for aid for the developments from the Government’s Renewable Energy Support Scheme, which will back plans that generate electricity at the lowest cost.

The pair must submit the projects for inclusion in the scheme’s first round today, Thursday April 30th. The original closing date was early this month, but the Covid-19 crisis led to this being postponed.

National grid operator Eirgrid will oversee the auction, which will be held in July. This will be the first of several that the State will run over coming years as it bids to lure more investment in renewable energy.

The Government wants renewable power to generate 70 per cent of the electricity used in the Republic by 2030. It averages at about 30 per cent at the moment.

However, figures released this week by the Sustainable Energy Authority of Ireland show that wind generated almost 44 per cent of the electricity used in the Republic through the first three months of this year.

The new scheme will replace the previous renewable energy feed-in tariffs that paid guaranteed prices to companies generating electricity from green sources such as on-shore wind.

Solar power and off-shore wind farms will qualify for supports under the new support scheme. That system is also designed to cut the cost to consumers and businesses of aiding renewable energy.

Noel Shannon, chief executive of Shannon Energy, said that he hoped his company’s joint bid with Obton would succeed July as that would allow them “proceed rapidly” with their development plans.

“By participating in the renewable energy support scheme auctions we are marking a significant contribution towards achieving the Government’s goal of 70 per cent electricity production from renewable sources by 2030,” Mr Shannon added.

Anders Marcus, chief executive of Obton, described the 11 projects as an important milestone in its work and in its partnership with Shannon Energy.

Obton has invested in solar energy projects worth a total of €1.85 billion across Europe and Canada. It has operations in Belgium, France, Germany, Hungary, the Netherlands and Poland.

Dublin-based Shannon Energy is involved in similar businesses in Ireland, Britain and western Europe and previously worked on projects in South Africa.