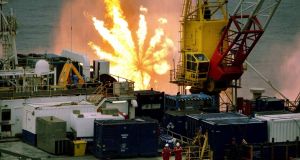 Oil and gas explorer Providence Resources has secured permission from the Government to carry out an important site survey at its Barryroe oil project off the Cork coast that would pave the way for drilling at the field.

A spokeswoman for the Department of Communications, Climate Action and Environment confirmed to The Irish Times that the permit had been granted on Thursday for a unit of Providence to undertake a seabed debris clearance and habitat assessment site survey over the oil field.

Shares in Providence Resources, which is led by chief executive Tony O’Reilly jnr, had jumped almost 30 per cent during trading in London on Thursday on speculation permission had been granted.

Providence, whose shares have been rattled in the past two months by delays in $10 million (€9 million) of funding from a Chinese backer of the Barryroe project, said in a stock exchange announcement on Monday that it was still waiting for the go ahead for a site survey.

Still, Providence’s stock remains at less than half the price at which it was trading earlier this year, as Chinese firm APEC, which took a 50 per cent stake in Barryroe last year, has missed a series of deadlines to transfer initial funds to cover preparatory work on the project.

Following decades of exploration off the coast of Ireland, Barryroe is seen as the closest prospect to delivering any oil. It was found in 2012 to hold an estimated 311 million barrels of recoverable oil.

Providence has received documents provided to APEC’s funders by banking giant HSBC showing that the money has debited from its account for payment to Providence but the transaction was not fully processed. The latest deadline for the funds to be received is next Monday.

Providence agreed in March last year to give APEC a half stake in Barryroe in exchange for the Beijing-based firm covering half of the cost of an associated $200 million five-well drilling programme. The deal also covers APEC lending Providence and Lansdowne Oil & Gas, which has a 10 per cent stake in the field, money to cover their costs.

Lansdowne shares jumped 49 per cent in London on Thursday.

Providence, whose cash levels have slumped 80 per cent to $1.45 million (€1.3 million) so far this year, may need to sell shares or raise debt to progress Barryroe if APEC fails to deliver initial funds, James McCormack, an analyst with the Irish firm’s UK broker Cenkos Securities, said on Tuesday.