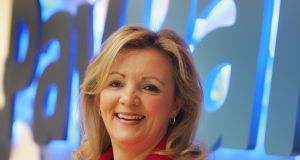 Ms Phelan left PayPal earlier this year after 30 years with the company, the last 13 as vice president.

Phelan Energy Group was established in 2005 by her brother, Paschal Phelan. It is a solar power producer, operating in over 15 countries worldwide and has projects valued at $150 million (€135 million) projects under construction. The group says it has a further pipeline valued at over US$1 billion dollars under development. Its first solar insulation in South Africa is the largest solar farm in Sub-Saharan Africa.

Ms Phelan currently is a board member of Ryanair and a member of the Voxpro board advisory committee.