Pilots’ protest did not ‘serve anyone well’ – airline chairman 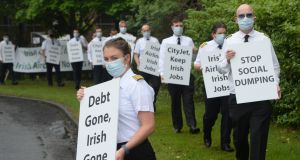 Cityjet executive chairman Pat Byrne said on Tuesday that a pilots’ protest at the Irish airline’s offices did not “serve anyone well”.

Pilots facing the loss of their jobs at the troubled carrier protested at Cityjet’s headquarters close to Dublin Airport on Tuesday morning. Speaking after the demonstration, Mr Byrne said that “holding a protest here today is not serving anyone well”.

He dismissed as inaccurate and misleading claims by the Irish Airline Pilots’ Association (Ialpa) that Cityjet was “offshoring” jobs.

Mr Byrne said Cityjet had been operating these services for SAS since 2016, using 240 northern European-based pilots, supplemented by about 20 Irish pilots.

Up to 57 pilots in Dublin face the loss of their jobs as Cityjet bids to emerge from High Court protection.

“We are in a consultation process over the past few weeks and twice Fórsa-Ialpa have unilaterally elected to go to media to air their version of the talks,” said Mr Byrne.

He argued that the union wanted Cityjet to employ Irish pilots to fly planes based in Scandinavia, providing them with hotels and allowances, instead of using crew based in the same place as the aircraft.

Mr Byrne said the airline had offered all Irish-based pilots trained to fly the Bombardier craft that are used on the SAS routes full-time jobs in Copenhagen, as there was no work for them in Dublin.

Cityjet provides aircraft and crew to fly routes for other airlines, but has lost all of its contracts except the SAS service since Covid-19 travel bans grounded commercial flying.

Ialpa has confirmed that 35 of the Irish pilots are not qualified to fly the Bombardier planes used on the SAS routes, but it argues that it would be cheaper to retrain them than to let them go.

The union says it has offered Cityjet a series of concessions that would allow it to save jobs at Dublin Airport.

About 270 pilot, cabin crew and ground staff jobs at Cityjet’s Dublin Airport base are at risk. The airline has already let more than 400 workers go from bases around Europe.

Since governments around Europe banned all but critical air travel last March, Cityjet has lost a contract to fly from Dublin to London City Airport as well as deals in France and Belgium.

The High Court appointed accountant Kieran Wallace as examiner to the company in April and granted it protection from its creditors.

5 Michael McAteer: ‘I just can’t believe that nothing can be saved’