Will backers of green evangelist Eddie O’Connor be rewarded for keeping faith? 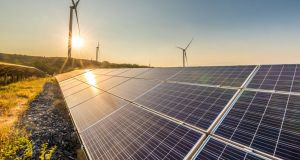 The scale of Mainstream’s development pipeline means the group has reached a stage where it needs the backing of a big balance sheet. Photograph: iStock

As timings go, the sale of the businesses of Airtricity, the wind energy firm set up in 1997 by one-time Bord na Móna boss-turned-green energy entrepreneur Eddie O’Connor, couldn’t have been better. The start of his next venture, Mainstream Renewable Power, less so.

In October 2007, a few months after debt markets succumbed to initial jitters ahead of the global financial markets crashing, Airtricity sold its North American unit to German utilities giant E.On in a deal worth $1.4 billion (€1.25 billion).

Four months later, Scottish energy group SSE agreed to buy the remaining European business for about €1 billion, when cash from the US deal was stripped out. O’Connor was a reluctant seller at the time, but Airtricity’s majority owner, NTR, had made its mind up. And an attempt by him to mount a rival bid didn’t amount to anything.

Within three weeks of the paperwork being signed, global equity markets had slumped about 12.5 per cent, setting off what would become the biggest collapse in asset prices since the Great Depression.

Unperturbed, O’Connor used three-quarters of his estimated €40 million Airtricity cheque to set up Mainstream in 2008, with his sights set on developing wind and solar projects in North America, the biggest energy market on the planet, emerging markets and offshore wind in Europe. Staff and close associates provided a further €20 million, and British bank Barclays stumped up €20 million of equity.

Meanwhile, a group of Irish high-net-worth investors, many of whom had made a packet on Airtricity, committed €74 million.

Lehman Brothers’ collapse in September 2008 put paid to much of Mainstream’s lofty initial ambitions, with the value of renewable energy pipelines slumping as buyers were only prepared to commit to projects that were close to construction and where funding was locked in.

The group had a rough time in North America as energy prices went through the floor. It conceded defeat in that market in 2014. And while it would gain traction as an early mover in markets such as Latin America and Africa, the constant demand of the business for cash meant that it was often forced to sell out of projects sooner than it would have liked.

A turning point came in early 2018 when Mainstream raised more than €600 million selling a wind farm project off the Scottish coast to French utilities giant Électricité de France (EDF). It represented a multiple of an abortive €100 million deal that had been struck two years earlier but – fortunately, in retrospect – had fallen through as the project was held up by a legal challenge mounted by a bird protection charity.

The sale allowed the company to call off a planned €150 million equity raise in the US. It also enabled it to repay all its debt and buy back shares held by Barclays and Japanese trading house Marubeni (which had invested €100 million in 2013) as well as warrants that entitled Australian financial group Macquarie to buy stock.

Some small investors, perhaps tired of O’Connor perennially dangling a potential initial public offering (IPO) of the business over the years, jumped at the chance to cash in their chips when Mainstream opened a temporary grey market for trading shares in late 2018. The 10 per cent of the stock that changed hands at the time traded at €9 per unit marking a 300 per cent return in the space of a decade.

The remainder have held out in the hope of a bigger payday. It may come soon.

The Irish Times first reported last December that Mainstream had hired investment bank Rothschild to help find an equity partner to help finance the development of its pipeline of projects. But it was clear even then that this would most likely lead to bids for the entire business.

Mainstream was able late last year to raise $580 million of favourable debt financing for the first phase of a massive 1,300 megawatt wind and solar project in Chile (the equivalent of a quarter of peak Irish power demand) and is close to closing a deal on the second stage. This is being done without the need for outside equity – something that the company had not expected when it won the development contract from the local government in 2016.

But the scale of its development pipeline – including massive plans in Vietnam and the Philippines, as well as its renewed interest in particularly capital-intensive European offshore projects – means the group has got to a stage that it needs the backing of a big balance sheet.

The European Commission estimates that up to 450,000 megawatts (450 gigawatts) of offshore farms will need to be installed to meet its target for a carbon-neutral EU by 2050. That’s 20 times more than what’s currently being generated in European waters.

Big Oil had been expected to be among the main contenders for Mainstream. The world’s largest fossil fuel producers have been among the most aggressive pursuers of investments in renewable power firms in recent years as they seek to diversify. However, they appear to be more concerned at the moment with preserving their balance sheets amid heightened volatility in oil markets in recent months.

A number of overseas utility groups, sovereign wealth funds, private equity firms and infrastructure funds are said to be running the rule over Mainstream ahead of non-binding bids being called by the end of next week.

While global electricity demand is expected to fall 6 per cent in 2020 on last year as a result of the economic shock and working-from-home practices resulting from the Covid-19, major utility groups are looking beyond the current turmoil and remain focused on the green agenda, according to analysts.

Final bids for Mainstream are expected at the end of July, with speculation pointing to a valuation for the business of up to €1 billion. That’s almost double the discounted valuation that was put on it as part of the 2018 grey market.

O’Connor, who turns 73 next week, owns 55 per cent of the business and would undoubtedly find a home for some of the proceeds of a sale in his latest venture, SuperNode, which aims to develop the technology for a pan-European smart grid for renewable energy.

Might some of the investors that followed him from Airtricity to Mainstream be tempted, too?

Covid-19: Little room for error if tourism is to reopen for staycations 05:23
Moving to a right-sized home: What are your options? 05:11
TikTok sets up European council to advise on content moderation policies 04:56
Dublin most popular city for Brexit relocations by financial firms 04:44
Stocktake: Beaten down UK stocks are the ‘trade of the decade’ 00:00