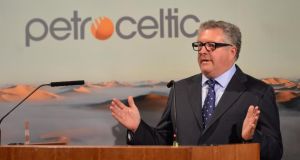 Petroceltic International, the Dublin-headquartered exploration company, is taking a unit of the company behind Wordpress, the world’s most popular blogging software, to the High Court in an attempt to unmask the anonymous author of a site critical of Petroceltic’s management.

Petroceltic, together with its chief executive, Brian O’Cathain, and its chief financial officer, Tom Hickey, this week filed a case against Aut O’Mattic A8C Ireland, the Irish unit of Wordpress’s US owner Automattic.

The writ concerns an anonymously written site hosted on Wordpress called Exposure and Truth, which contains a slew of serious allegations against members of Petroceltic’s management team, board and advisors.

When the company first became aware of the site shortly after it appeared, it is understood that Petroceltic’s top management resolved to ignore it. Other commenters soon started posting on the site purporting to provide further information about the issues .

Over the following weeks, a series of further posts were made, making more specific and serious allegations against named members of the management team. It is understood that this escalation prompted Petroceltic to change course, and seek the removal of the material, which it considers to be defamatory and untrue.

Petroceltic recently engaged in correspondence with Automattic. It wanted the material removed and the identity of the author to be revealed.

When Petroceltic did not get the information it was seeking from Automattic, it moved to try and force its compliance through the courts. It decided to sue the Irish unit of Automattic because it understands that any Wordpress sites that originate from outside the US are hosted by this entity.

Petroceltic declined to comment, while Automattic had not responded to a request for comment from The Irish Times by last night.

This project has recently been at the centre of a dispute between Petroceltic and Worldview Capital, the company’s biggest shareholder, which has called a shareholders’ meeting next month to limit the ability of management to sell assets.