New owners of Whitegate refinery say there may be growth 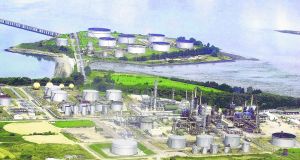 The Whitegate Oil refinery provides about 40 per cent of Ireland’s petroleum needs, including petrol, diesel and kerosene

Whitegate Oil refinery’s new owner has indicated it may expand the facility’s business and workforce over the longer term.

Canada’s Irving Oil agreed to buy Ireland’s only refinery from current owner Phillips 66 in a deal set to close by the end of next month.

Speaking after the transaction was announced, Irving’s chief operating officer Mark Sherman said the company intended to integrate Whitegate with its other operations in Canada and Amsterdam.

“We would look in the longer term at the investment,” he said. “There are opportunities for growth.”

Mr Sherman added that this could lead to increased employment at the Co Cork refinery.

He said it was Irving’s priority to consolidate and increase Whitegate’s domestic market. The Canadian company has committed to maintaining the 160 jobs there. “It is our intention to have everybody fully employed at Whitegate,” Mr Sherman said.

The refinery provides about 40 per cent of Irish petroleum needs, including petrol, diesel and kerosene, and the government regards it as key to energy security.

Whitegate’s operations lost $148 million in 2014, the most recent year for which figures are available. The deficit was more than three times the $47 million recorded in 2013.

Mr Sherman stressed that Irving was not concerned by this as it was a private company and could take the longer view of the business.

“There was a lot of movement between Whitegate and Phillips, and on a 10-year average the refinery has actually done reasonably well.”

The State took ownership of Whitegate oil refinery from BP in the late 1980s and sold it to Phillips in 2001. The Houston, Texas-based group made it known several years ago that it wanted to sell the Irish business.