More than 7,000 jobs could come from solar power - report 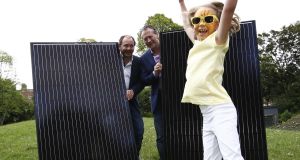 Solar power could create up to 7,300 jobs while meeting 7 per cent of electricity demand, according to report published by the industry on Tuesday.

The Irish Solar Energy Association is lobbying the Government for supports similar those given to wind and other renewables, which will cost consumers and businesses €181 million this year.

On Tuesday, the body said that a report it commssioned from accountants KPMG shows that solar has the potential to create 7,300 jobs in building and operating generating plants.

The association added that results from commercial rooftop solar panels installed in the south east over the first two weeks of June indicate that an established industry could meet 7 per cent of Irish electricity demand.

Chairman David Maguire said on Tuesday that solar is the only form of renewable energy that does not receive some form of subsidy to aid its development.

He explained that the group favours an auction system rather the system of guarranteed prices given to wind farms, which are funded through a levy on electricity bills known as the public service obligation.

Using the auction approach, the Single Electricity Market Operator could decide in advance that solar generators should supply a set amount of the country’s total electricity demand.

It would then invite the industry to bid for that and award contracts to the cheapest suppliers. “They would have to have land, planning permission and grid connections to qualify, and they would have to pay a deposit to take part,” Mr Magure said.

He added that any operator who fails to fulfill their contract could be sanctioned. “We believe that this would give the industry and consumers the best value ,” Mr Maguire said.

The Government is to decide on a replacement for the current round of supports, dubbed Renewable Energy Feed in Taruiff (Refit), this year. Householders and businesses pay for this through the public service charge on their bills.

Over the 12 months to next October, they will have paid €181 million to the renewable energy industry, which is largely made up wind generators.

The cash collected from consumers and businesses bridges the gap between the wholesale market price of electricity and prices guaranteed to the wind farm owners under the Refit scheme.

Despite the supports, Mr Maguire warned that the Republic is likely to fall short on renewable energy targets agreed with the EU, which require 40 per cent of all electricity to be generated from green sources by 2020.

This could result in the State paying fines of more than €300 million a-year to Brussels for failing to keep to this committment.

“It is clear the country is facing a real challenge to meet these targets and avoid significant fines,” Mr Maguire said.

“Despite the successful deployment of wind energy in Ireland, which enjoyed considerable state support, wind alone will not ensure that we reach that goal.”

He argued that solar, which contributes significantly to power generation in other European countries, but is still undeveloped here, could aid the Republic in meeting its targets with the right level of support.

He also pointed out that Germany, which is on a similar latitude to Ireland, gets 7 per cent of its power from solar.

Mr Maguire’s association has more than 100 members, including his own company, BNRG.

1 Life as a Facebook moderator: ‘People are awful. This is what my job has taught me’
2 Ombudsman upholds 8 tracker complaints against banks
3 Irish in-flight entertainment firm blames coronavirus for closure
4 How well paid do you think you are? Here’s how to work it out
5 Ibec warns that Government may have underestimated corporation tax loss
6 FBD rejects ‘insurance rip-off’ accusations as profits spike and dividend doubles
7 Flight attendent seeks High Court injunction against Aer Lingus
8 Tax burden on Irish households among lowest in EU
9 Wealthy investors’ legal challenge against Revenue fails
10 Coronavirus: ‘All bets are off’, says aircraft industry chief
Real news has value SUBSCRIBE