The State company also managed to eliminate debt, clearing almost €24m in liabilities during the year 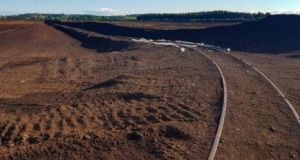 Bord na Móna has warned that it continues to operate in a “challenging business environment” complicated by Covid-19. Photograph: Getty Images

Losses at Bórd na Móna more than halved last year to €22.5 million, the State company’s annual report will show when it is published on Wednesday.

The company, which is moving out of its original business of peat-production into energy, waste-recycling and other activities, is due to publish figures for the 12 months to March 25th, 2020.

The company also managed to eliminate debt, clearing almost €24 million in liabilities during the year, leaving it with a “positive cash position” of €1 million.

Bord na Móna’s losses stem mainly from €66 million in costs resulting from the company’s move out of peat-production and into other businesses.

Before accounting for these expenses, its annual report will show that its ongoing operations earned a profit of €40.4 million in the period, in line with the previous financial year.

Mr Donnellan acknowledged that the shift from peat-production had resulted in a number of costs that were reflected in the company’s losses for the 2020 financial year. However, he argued that Bord na Móna’s stable operating profit and reduced debt showed that the State company remained financially stable.

Oweninny’s first phase produces 93 mega watts (MW) of electricity at full capacity. When the second and final stage is complete the power plant will generate 172 MW, enough to supply around 100,000 homes.

The company opened Ireland’s only farm plastics recycling plant at the site of the old peat briquette factory in Littleton, Co Tipperary.

Bord na Móna warned that it continued to operate in a “challenging business environment” complicated by Covid-19.

However, a statement added that it expected increased profits and growth for its new businesses in the current financial year.

Commenting on the results, chairman Geoff Meagher said the results showed Bord na Móna was beginning “a new chapter in its existence”.

1 New restrictions risk pushing economy into double-dip recession
2 ‘Lockdown lobby’ needs to explain why this time would be different
3 Covid-19 has shown that much of ‘normal’ life should have been binned years ago
4 Cabinet to agree on implementing EU travel plan
5 Banks urge borrowers facing hit from new restrictions to engage
6 IBM beats analysts’ forecasts with gains in cloud services
7 EU agrees to intensify talks on post-Brexit deal
8 Number of houses for sale falls to 14-year low
9 The Irish Times claims largest number of entries on journalism awards shortlist
10 Irish retailers are not hotbeds of Covid-19 infection, figures suggest
Real news has value SUBSCRIBE