Conroy Gold in deal to secure investor to develop gold mine 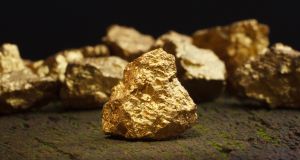 Irish exploration company Conroy Gold and Natural Resources is in the early stages of a deal which could see an Azerbaijan-focused copper and gold producer invest up to €7 million in joint ventures to develop a gold mine along a 65km stretch known as the Longford-Down Massif.

The Irish-explorer said on Tuesday it had entered into non-binding heads of terms regarding the proposed joint ventures with Anglo Asian Mining which, like Conroy Gold, is quoted on London’s Alternative Investment Market (AIM).

Under the deal Anglo Asian Mining could acquire up to a 55 per cent interest in companies controlling some of Conroy’s key assets, including Clontibret in Co Monaghan; Clay Lake in Co Armagh; and nine other licences in the Republic along the Longford-Down Massif trend, which stretches from Co Longford to Co Down.

When the deal is agreed a 17.5 per cent interest in the joint venture companies will be issued to Anglo Asian in exchange for it committing to spend €2 million on the “primary expenditure programme”.

The company will then have the option to increase its interest by a further 7.5 per cent in each joint venture company upon spending an additional €2 million.

If it goes on to meet “certain of the expenditures of the secondary expenditure programme” it will have the option to acquire 55 per cent in each join venture company. It would have to spend a further €3 million, in addition to spending money on drilling, studies and land acquisition, to have that option.

Having signed the heads of terms, Anglo Asian has deposited €250,000 into a bank account, and will deposit a further €250,000 once the final agreement is signed.

“The heads of terms agreement with Anglo Asian is a very significant step forward for Conroy Gold and its shareholders as we move to develop a gold mine at Clontibret and to further explore the district scale gold trend we have discovered in the Longford–Down Massif,” said chairman Richard Conroy.

“Anglo Asian is an established gold-producing company generating significant positive cashflow and is debt-free. I am particularly encouraged by its expressed intention to proceed with the project in the immediate term.”

Shareholder approval will be required before the joint venture deal is finalised.

Some 325,000 warrants to acquire ordinary shares in the group at 16p have also been issued to Anglo Asian.