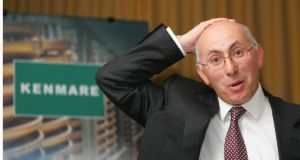 Kenmare Resources has received a watered-down share offer from Australia’s Iluka Resources yesterday, valuing it at about €260 million (£189 million).

The Dublin-listed miner said it was now talking to its would-be buyer about the latest offer of 0.016 Iluka share for each Kenmare share, which is considerably lower than an earlier proposal of 0.036 last June that Kenmare’s board had rejected.

The offer comes as the mining group published its annual report, showing a loss after tax of $100.8 million (€90.7 million) in 2014. That compared with a loss of $44.1 million the previous year but includes an impairment charge of $64.8 million.

The company also announced a restructuring of its debt that will see lenders provide up to $50 million in additional funding.

Kenmare has been struggling with falling prices for ilmenite – of which it is one of the world’s largest producers – with chairman Steven McTiernan said it was the “single issue which dominated Kenmare’s [financial] performance” in 2014.

“These disappointing results are a direct result of reduced product prices and constrained demand for sulphate ilmenite, combined with unit costs that have yet to reflect the full production potential of the [Moma] mine [in Mozambique].

Prices for sulphate ilmenite have dropped from the mid $300s per tonne in 2013 to between $100 and $150 per tonne at present. Despite a general consensus that the price would bounce back last year, the fall in prices continued, Mr McTiernan said. “Consequently and unfortunately, Kenmare incurred a loss in 2014.”

Ilmenite is the source of titanium dioxide which is used as a pigment in paint and plastics. Kenmare says an increase in production of the mineral in China was largely attributable for the fall in prices.

“A consequence of the low ilmenite prices ... is that the company has needed to engage with its lenders to further restructure its debt obligations,” managing director Michael Carvill said in his report, adding that the complicated structure of the group’s debt had made progress slow.

The debt restructuring will extend the maturity of the mining group’s debt but commits Kenmare to deleveraging in the medium term and also grant its lenders a seat on the board.

The proposed buyout is in line with Iluka chief executive David Robb’s strategy to use the company’s strong balance sheet to expand through bargain hunting.

Kenmare had rejected the previous offer last year saying it did not place sufficient value on its main asset, the Moma titanium minerals mine. Kenmare shares have lost more than 70 per cent of their value since rejecting Iluka’s initial offer.

Yesterday the company said it was considering its financial position, prevailing market conditions and terms of its debt restructuring. It was in the interests of its shareholders to work with Iluka on the proposal, it said.

“The Kenmare Resources board has effectively ratified the offer by intending to work with Iluka towards satisfaction of the preconditions,” Investec analysts said in a note. Iluka said it would provide further details if the transaction proceeds.