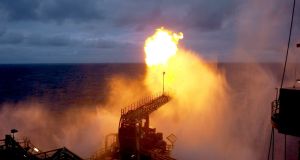 A gas flare lights up the Atlantic skyline during a well production test at the Corrib gas field, 80km off the Co Mayo coast

The Irish Offshore Operators’ Association (IOOA), which represents licensed oil and gas explorers in the Republic’s waters, points out in its energy review 2021, that the Corrib field is now the State’s sole domestic source of natural gas, used to produce much of Ireland’s electricity.

The association notes that since its last r¼eport in 2016, “the risks of potential interruption to Ireland’s energy supply have increased significantly”.

Production ceased from the Kinsale gas field last year, while a Government ban on issuing further exploration licences prompted many companies, including the industry’s big names, to hand back permits to operate here.

“Ireland will no longer be connected to the EU gas or electricity grids after the end of 2020, and will be increasingly reliant on gas imports from the UK via the gas interconnectors,” the report says.

The offshore industry group points out that the Sustainable Energy Authority of Ireland’s latest forecasts show that natural gas demand here will be only slightly below current levels in 2030 even though 70 per cent of our electricity will then be generated by renewables.

“Ireland will be in breach of a number of EU directives on oil and gas security of supply from the end of 2020 when the UK leaves the EU,” the association warns.

It has appointed Providence Resources’ chief executive Alan Linn as its new chairman. In a statement, Mr Linn argued that a “scientifically-informed, evidence-based” debate on national energy policy was necessary.

“I am looking forward to working with Ireland’s offshore industry and other key stakeholders in advancing crucial energy-related issues for Ireland, including the environment, energy security, employment and carbon capture,” he said.

Providence Resources is the majority shareholder in the Barryroe field off the south coast which could yield an estimated 350 million barrels of oil and a large quantity of natural gas.

Ireland generates around 60 per cent of all electricity it uses by burning natural gas.