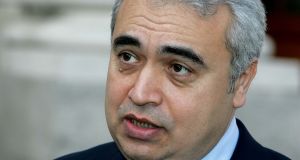 After the largest decline in global emissions since the second World War due to the pandemic in 2020, there was a historic opportunity to have 2019 as the year when emissions peaked, he told a briefing in an advance of a global net-zero summit on Wednesday in advance of the COP26 UN summit in Glasgow in November.

While national pledges on decarbonisation “are excellent”, to curb emissions a global course was required “to make the clean energy transition happen, and to be cheaper and more affordable, which is good for everybody”.

He confirmed, nonetheless, the IEA was going to track countries to closely monitor progress, or lack of it, on implementing their national pledges.

IEA analysis had shown rapid and deep action over the next decade in all energy sectors was required in tandem with increased international collaboration. “This requires complete transformation of our existing energy infrastructure,” Mr Birol said.

While there was good momentum in the power-generation sector (responsible for 38 per cent of emissions) due to renewables “getting cheaper and cheaper”, transportation – one of the most critical sectors – had some way to go. This required decarbonisation of not only cars but also trucks and buses, he said.

Global EV sales were growing very strongly in spite of the economic downturn, and would become a cheap solution, but they accounted for only 4 per cent of sales in comparison to SUVs, at 42 per cent, last year.

This week’s gathering would attempt to “accelerate the momentum behind clean energy and examine how countries can work together more effectively to reduce their greenhouse gas emissions to net zero in line with shared international goals”, he added.

“The world’s growing clean energy and climate ambitions are sending an unmistakable signal. Over 120 governments have announced their intentions to bring emissions to zero by the middle of this century. A tremendous amount now needs to be done to turn ambitions into reality: long-term targets by themselves will not suffice, as the recent rebound in global CO2 emissions shows,” Mr Birol said.

To help countries turn ambitions “into coherent real-world action”, the IEA is to publish on May 18th the world’s first comprehensive roadmap for the global energy sector to reach net-zero emissions by 2050, he said.