‘We are at the dawn of a new industrial revolution’, says Eamon Ryan 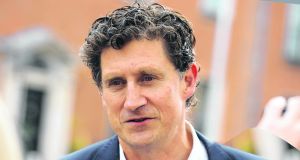 Minister for the Environment and Green Party leader Eamon Ryan said co-operation with the UK would be best achieved through co-operation on ‘the electrification of everything’. Photograph: Alan Betson

Enhanced co-operation with the UK will be critical to Ireland decarbonising its economy and to achieving net-zero carbon emissions, according to Minister for the Environment, Climate and Communications Eamon Ryan.

The UK had been a global leader in reducing emissions through use of climate legislation and Ireland was about to replicate that, including the adoption of five-year carbon budgets, he told a British Irish Chamber of Commerce event bringing together energy leaders from both jurisdictions on Thursday.

Ireland in turn could serve as example to Britain on how effective climate action could be pursued in a non-divisive way, as was being achieved with the help of the all-party Oireachtas climate committee, which was setting a future course for the country.

“We are at the dawn of a new industrial revolution. But it must be change for the better . . . a revolution that must belong to everybody,” Mr Ryan said.

Co-operation with the UK would be best achieved through co-operation on “the electrification of everything” and especially in balancing renewable electricity and variable demand from consumers. “Those who do this best, will succeed most,” he told the Building a Pathway to Net Zero event.

This all hinged on building the required transmission and distribution networks; “and won’t work if we do it as isolated islands”.

This also required working together on the global stage in advance of the UN COP26 summit in Glasgow, he said. This global gathering needed to address how the world was going to account for land use emissions and biogenic methane associated with agriculture.

Joanna Whittington, director general of energy and security with the UK Department for Business, Energy & Industrial Strategy said co-operation on renewable electricity was already at a high level, particularly on the use of offshore wind resources in the Celtic Sea.

She predicted this would build as the countries set a path for net zero and share learnings. There was strong support for prime minister Johnson’s 10-point decarbonisation plan, but it had to be rolled out across the whole of government and focussed on delivery, “and we must move faster in almost every sector”.

With electricity demand set to double by 2050 because of electrification of transport and heat, there was a need to “make sure the electricity is clean”, Ms Whittington said.

The UK was already successful in offshore wind with 10.5 gigawatts (GW) of electricity, and was set to reach 40GW by 2030 from that source – 1GW is sufficient to power a mid-size city. This was made possible by providing certainty for the industry through the “contracts for difference” mechanism, she believed.

There was a need for every sector in the Irish economy to set out detailed decarbonisation plans on the path to net-zero, said Marie Donnelly, chairwoman of Climate Change Advisory Council. While there was opportunity for co-operation on renewable energy, the one significant difference with the UK was Ireland’s level of agricultural emissions.

‘We will get there’

Ireland was determined to reposition itself from laggard to global leader on climate action, she underlined – not that it was the biggest emitter in the world, but because it was “an uncomfortable position” for the country to be in.

Getting the best grid and capacity to cater for variable power, while harnessing the best resources in offshore wind, were required to transform the country’s reputation – as well as ending its outlier status on agricultural emissions.

She had no doubt Ireland could achieve that position because the country had always shown itself to be flexible and adaptable in the face of recessions and financial crises. “I believe we will get there because the young generation are going to force us to do it,” she added.

Group chief executive of Mainstream Renewable Power Mary Quaney said renewable energy development capital had shifted its thinking and changed its perception of risk and costing it appropriately, to seeing it as an opportunity and a growth area.

Investment in the transition would continue if helped by consistency in policy, while having joined-up plans between both jurisdictions would provide certainty and ensure private investment continued, she said.