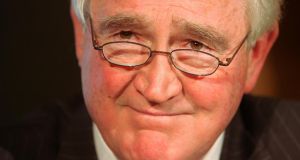 Eddie O’Connor, Mainstream founder: ‘This partnership is the crucial next step in the vision we set out for Mainstream.’ File photograph: Frank Miller

Mainstream Renewable Power, the wind and solar energy group founded by Eddie O’Connor that focuses on emerging markets, is set to see a unit of Norwegian investments company Aker take control of the business in a deal that values it at up to €1 billion.

Aker Horizons, which is focused on renewable energy and green technology, will take a 75 per cent stake and existing investors will have the option to cash in or follow Mr O’Connor, who plans to reinvest some of his money in the final 25 per cent of the business.

The deal, which includes a potential €100 million payment in 2023 if certain performance conditions are met, values Mr O’Connor’s 55 per cent stake at as much as €550 million. It also represents a return of up to 5½ times the investment for Mainstream’s original investors, including a number of Irish high-net worth individuals that backed the Dublin-based company when it was set up in 2008.

As part of the deal, the Norwegian company is also acquiring a 50 per cent stake in Supernode, a company set up by Mr O’Connor and Mainstream in 2018 that is developing superconducting cable systems to transfer bulk power.

Aker Horizons chief executive Kristian Roekke said at an investor presentation on Tuesday that the aim is for an initial public offering of Mainstream within the next two to three years. Separately, Aker Horizons, which is also invested in offshore wind and carbon capture projects, plans to raise money privately and float on the stock market in the “near term”, he said.

“This partnership is the crucial next step in the vision we set out for Mainstream in 2008, to lead the global transition to renewable energy and rid the world of CO2 emissions,” said Mr O’Connor (73), who will remain on as company chairman.

“It means we can widen our scope for entry into new markets and further deepen and expand our leadership position in existing ones, such as in Chile where we will soon be supplying the equivalent of one in seven Chilean homes with power from our wind and solar facilities.”

Mainstream chief executive Mary Quaney said the deal, which is subject to regulatory approval, will allow the group to accelerate its global expansion plans to bring 5.5 gigawatts of wind and solar assets to financial close by 2023. That’s slightly higher than the current peak-energy demand in the Republic.

Mainstream, set up by Mr O’Connor in 2008 after the sale of the Airtricity business he had developed, is undergoing a period of major expansion across Latin America, Asia-Pacific and Africa as well as in the offshore wind sector globally.

The company set out in late 2019 to secure an equity partner and hired investment bank Rothschild & Co to manage the process.