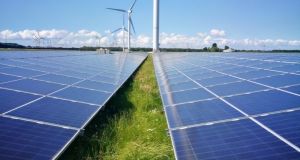 Overall, some 300 MW of additional solar PV projects is contracted for acquisition this year

Alternus, a Dublin-headquartered green energy provider that recently registered its shares on the Euronext NOTC market in Oslo, is expecting revenues to increase five-fold this year on completion of a number of deals.

The company, which is led by telecoms entrepreneur Vincent Browne, invests in solar photovoltaic parks across Europe.

Having started out in 2016 with two parks and a six megawatt (MW) capacity, the current portfolio consists of 39 owned or contracted parks in Germany, Italy, Netherlands, Romania and Poland with in excess of 150MW of capacity. It is aiming to expand this to operate over two gigawatt (GW) of solar parks by the end of 2025.

It successfully delisted from the US market and started trading on the Euronext NOTC market in January. This is a marketplace for unlisted shares that is owned by Oslo Børs.

Earlier this week the company announced a 77 per cent year-on-year increase in revenues to €4.1 million with ebitda rising to €2.6 million as gross margins from operating parks almost doubled to €3.2 million.

Thee company said it expects 109MW of contracted projects to be completed in the first half of this year and that on completion of these that its annual run-rate revenues will increase five-fold to more than €22 million.

Overall, some 300 MW of additional solar PV projects is contracted for acquisition this year, ten times the volume owned by the group at the end of 2019.