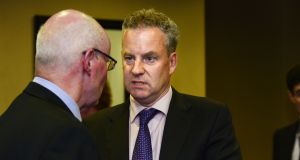 Dissident Conroy Gold and Natural Resources shareholder Patrick O’Sullivan has called for another extraordinary general meeting of the group’s shareholders.

Mr O’Sullivan, who is the largest shareholder in the business, was frustrated at an egm last week in having three directors proposed by him elected.

Although shareholders cast votes on the election of the three proposed directors, chairman Prof Richard Conroy ruled after the poll that the motions to appoint them were “of no effect”.

Six current directors were unseated at the same meeting.

Now Mr O’Sullivan, who has built up a 28 per cent shareholding in the business since 2009, is turning his fire on Prof Conroy, the company’s founder and chairman.

Conroy Gold notified the Irish Stock Exchange ahead of trading on Wednesday that Mr O’Sullivan had asked for a second egm for the purpose of removing both Prof Conroy and company managing director Maureen Jones.

That would leave only Prof Garth Earls of the original directors in place. Mr O’Sullivan has argued the company needs to bring on board people with expertise in the gold exploration industry in order to raise the finances necessary to explore one of its prospects.

He is also seeking the appointment of himself, Paul Johnson and Gervaise Heddle as directors. These are the same three people whose appointment was frustrated last week when Prof Conroy said that, on legal advice. the motions to elect them were of no effect despite having already being put to the egm and voted upon.

Lawyers for Mr O’Sullivan have also sought a number of undertakings from the company pending the calling of another egm. They want assurances that the company will not appoint any new directors before shareholders convene.

They have also sought a commitment from Conroy not to issue new shares in the interim, a move that would dilute Mr O’Sullivan’s holding in the business.

Mr O’Sullivan took a High Court action ahead of last week’s meeting, claiming shareholder oppression. He raised concerns at that time that the board of Conroy Gold and Natural Resources was contemplating measures to dilute the current members’ shareholdings before last week’s meeting with a view to defeating his resolutions.

Counsel for the company subsequently told the court that it agreed no further shares in the company would be issued before last week’s meeting and that there would be no dilution of the plaintiff’s shares before that meeting.

In its statement to the Irish Stock Exchange on Wednesday, the company said it was considering the request in conjunction with its legal advisers and would issue a further statement “in due course”.

Conroy Gold and Natural Resources is best known for it plans to develop gold deposits that it has found near Clontibret in Co Monaghan and Slieve Glah in Co Cavan. It also has interests in Finland.