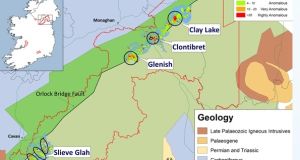 Conroy Gold and Natural Resources has said four new gold zones have been intersected in a drilling programme on its Glenish target in Ireland.

The drilling results, together with previous channel sampling in the area, have demonstrated the presence of the zones in a 150-wide structural corridor in the western part of the target, near Clontibret, Co Monaghan.

Conroy said the gold mineralisation in bedrock in the drilling area was traced down dip for more than 70m and remained open in all directions.

The Glenish gold target is a large, 147 hectare, gold-in-soil anomaly located 7.5km southwest of the company’s Clay Lake-Clontibret target where the company is targeting a potential of five million ounces of gold.

The Irish mining firm recently raised £1.01 million (€1.28m) in a placing to fund the advancement of the targets.

“The newly discovered gold zones significantly upgrade the potential of the Glenish gold target, which is close to our already established Clay Lake- Clontibret gold target, and further enhances the prospectivity of the company’s gold licences in Ireland,” said chairman Prof Richard Conroy.

Dior to open boutique in Brown Thomas later this year 14:59
Davy chief executive and deputy chairman resign in fallout from €4.1m Central Bank fine 13:57
Liam Carroll’s legacy in property market will be debated for years to come 05:41
Officials may release beef carcasses from a herd whose location was unknown 05:31
Women on Air calls for ‘hard data’ and broadcasting quotas 6 Mar

7 Nanobots will live in our brains in the 2030s, says Google boss

10 ‘I love the place’: US billionaire John Malone on his €300m Irish portfolio