Auctioneer for Bord na Móna did not have proper licence 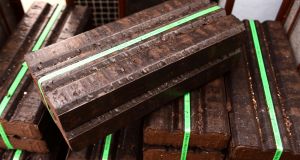 Briquette producer Bord na Móna is owed €420,000 by a Kildare-based auction house that has been placed in liquidation. Photograph: Cyril Byrne / The Irish Times

A liquidated auctioneering company that owes Bord na Móna €420,000 did not have the legally required licence when it sold equipment for the State company last autumn.

It has emerged that neither the company nor its owner and director, Paul Cooke, were licensed to act as auctioneers, when Moybrone ran two sales of machinery and vehicles for Bord na Móna in October and September.

A register of licensed auctioneers kept by State watchdog the Property Services Regulatory Authority (PSRA) shows that both Moybrone’s and Mr Cooke’s licences lapsed in June and July.

Under the Property Services (Regulation) Act, 2011, auctioneers must have a valid licence. The law also makes it an offence to hold auctions without a licence. Courts can fine or jail anyone convicted for this.

The PSRA’s lawyer raised the fact that Moybrone’s and Mr Cooke’s licences had lapsed at the company’s creditors’ meeting. The authority has yet to indicate what action it intends taking.

Paul Cooke Auctions ran three sales for Bord na Móna, which, it is understood first hired the firm in 2015, when the licences were still valid.

The State company maintains that it followed all proper procurement procedures when it was dealing with the auctioneer.

Moybrone’s statement of affairs shows that it owes Bord na Móna €420,000. This dates back to a sale of equipment and vehicles for the State company last October. Bord na Móna is pursuing Moybrone for this cash in the courts.

The statement of affairs shows a shortfall of €210,000 in Moybrone’s client account.

Overall, it owes former clients €481,799 and Moybrone’s statement shows its assets fall €356,832 short of its liabilities.

Mr Cooke could not be reached for a comment on Friday.

Separately, workers at Bord na Mona’s peat briquette manufacturing plant in Littleton, Co Tipperary, will vote within the next two weeks on proposed redundancy terms finalised in talks between unions and management.

The deal agreed by unions, Siptu, Unite and Connect, involves six weeks’ pay for every year of service, including statutory entitlements, a €500 voucher and other benefits.