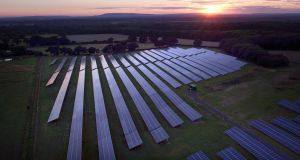 A recent KPMG report on the potential benefits of solar energy in Ireland concluded that the industry could reasonably deploy over 3,750 MW of solar from now to 2030. Photograph: PA

Ireland’s fledgling solar power industry has received a major boost with the announcement that the State-owned Ireland Strategic Investment Fund (ISIF) is to co-invest €140 million in 20 new solar parks.

The fund has teamed up with German solar park operator Capital Stage to invest in a portfolio of sites run by Dublin-based energy firm Power Capital.

The project will see the Irish company develop and operate 20 new solar parks from Louth to west Cork with potential generating capacity of 140 megawatts (MW).This is the first time ISIF has invested in solar energy, which has come down in cost. Planning permission was secured on most of the sites in 2017.

Ireland lags behind other European Union countries in adopting solar, despite receiving similar levels of radiation to countries such as the UK, which is now the sixth-biggest globally in terms of total installed capacity, behind China, Germany, Japan, the US and Italy.

In May last year, solar produced more electricity in the UK than coal for the first time.

A recent KMPG report on the potential benefits of solar energy in Ireland concluded that the industry could reasonably deploy more than 3,750 MW of solar from now to 2030, supporting more than €2 billion in gross value added, more than €800 million in direct taxes and sustaining 7,300 jobs.

Power Capital’s Peter Duff said the investment “rubberstamps a major commitment from ISIF and from Capital Stage, whose input and investment will help us progress this high-quality pipeline of solar parks along Ireland’s east and southwest coasts.”

Paul Saunders, head of innovation and special investments at ISIF, said: “ This partnership supports Ireland’s continued transition to a low carbon economy against a backdrop of Ireland possessing a solar resource similar to that in southern UK and northern Germany where solar energy has delivered steady returns for institutional investors.”

Dublin-based Power Capital was set up 2011 as an investment vehicle for the renewable energy sector, specialising in the European solar market.