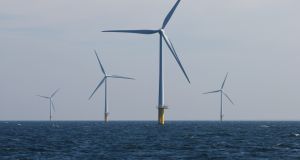 Mainstream’s move to set up a grey market in its stocks comes as the group has put a full stock market flotation on the back-burner until the end of the decade. Photograph: Jasper Juinen/Bloomberg

Mainstream Renewable Power, the green energy group founded a decade ago by businessman Eddie O’Connor, has vowed to have a long-awaited grey market up and running by the end of the year for investors to trade shares in the company.

Speaking in a wide-ranging interview with The Irish Times, group chief executive Andy Kinsella said the market will be established after Mainstream sells most or all of a major wind farm project off the coast of Scotland. The 450-megawatt scheme, known as Neart na Gaoithe, would be capable of powering all homes in a city the size of Edinburgh.

Mr Kinsella said the planned Scottish development, which benefits from a 15-year, inflation-linked power supply agreement into the UK grid, will sell for a “multiple” of an abortive €100 million deal stuck two years ago.

That transaction fell through as a bird protection charity pursued a legal challenge against such developments. However, the Royal Society for the Protection of Birds (RSPB) in Scotland failed in November to get leave to pursue a final attempt through the UK supreme court to block offshore wind farms originally approved by Scottish ministers in 2014.

Mainstream has hired KPMG in the UK to sell a controlling stake in the Scottish project. The surge in the equity value of the scheme in the past two years stems from a slump during the period in the cost of producing energy from offshore turbines and a surge in investors chasing green-energy assets.

Mainstream’s move to set up a grey market in its stocks comes as the group has put a full stock market flotation on the back-burner until the end of the decade.

“The grey market will be launched by the end of the year. That’s a guarantee,” said Mr Kinsella.

Of almost €200 million of equity committed to Mainstream since it was set up a decade ago, €74 million has come from high-net worth individuals in Ireland, with a further €50 million from Mr O’Connor, management, staff and close associates of the company.

Mainstream entered talks last year on selling a $150 million (€124.6 million) stake in the group to unnamed US-based investors. However, management decided to scrap the plan as it received money from the closing of a financial deal on two Chilean projects and eyed a payday from the Scottish development.

Mr Kinsella said that the potential Scottish deal has also allowed the company to pull back from a previous plan to sell a 25 per cent stake in a 1,300-megawatt Chilean wind and solar energy scheme being developed on foot of contracts won by Mainstream from that country’s government in August 2016.

The company is also active in Vietnam, Mexico, Egypt, Senegal, Ghana and the Philippines and eyeing opportunities in other emerging markets.

Mr O’Connor set up Mainstream in 2008 after the assets of Airtricity, the wind energy company he founded two decades ago, were sold to Scottish & Southern Energy, now SSE, in a deal worth €1.8 billion. Mr Kinsella, who has been with the company since its establishment, took over as chief executive last September as the founder became executive chairman.

The company hired a former Wall Street investment banker, James McGinnis, in late 2016 to head up a new division, Mainstream Renewable Capital, which is in charge of raising capital for the group’s multi-gigawatt portfolio of wind and solar projects.