Will Davos make any difference to global inequalities? 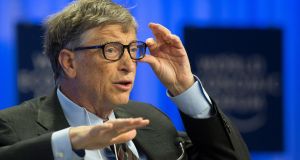 Bill Gates, co-chair and trustee of the Bill and Melinda Gates Foundation, speaks during a panel session at the 44th Annual Meeting of the World Economic Forum (WEF) in Davos, Switzerland. Photograph: EPA

The figures in the Oxfam report were scarcely believable – the richest 85 people in the world share a combined wealth, about €1.2 trillion, equal to that of the world’s poorest 3.5 billion people. As one Oxfam director put it, the tiny elite at the top “could all fit comfortably on a double-decker bus”.

The report, Working for the Few, was confirmation that global wealth inequality is careening out of control, with estimates suggesting that the poorest half of the world’s population possesses barely 1 per cent of global wealth, while the richest 1 per cent accounts for 46 per cent of the total wealth on Earth.

That looks like an utterly unsustainable wealth pyramid, not to mention an unconscionable and pernicious one.

And the inequality is increasing, precisely because the influence wielded by those at the top leads to favourable policies and a “capture of opportunities”, ensuring wealth is further concentrated rather than distributed.

Timing
The report was timed to force global inequality to the top of the agenda at Davos – get a few thousand of the world’s most powerful people discussing the problem and you might have some chance of making progress on what appears to be an intractable problem.

Within a day, however, the person at the very top of that global pile, the man in the front seat of the double-decker bus, so to speak, delivered an impassioned argument for the vital importance of foreign aid and a stirring defence of the progress already made in the fight against global poverty.

Bill Gates’s annual Gates Foundation letter tackled some of the pervasive myths about the efficacy of foreign aid, pointing out that “by almost any measure, the world is better than it has ever been”.

As a corrective to the pessimism and anger generated by the Oxfam report, it was both timely and effective.

However, Gates almost entirely avoids the issues raised by Oxfam, merely acknowledging that “inequality will still be a problem: there will be poor people in every region”.

Capitalism
Gates might be the most successful capitalist of all time, but he is not blind to the limitations of the prevailing economic order in helping people’s lives improve. In an interview with Ezra Klein of the Washington Post, he admitted that “capitalism did not eradicate smallpox. It just doesn’t know how. Polio eradication is a work in progress, but it’s not being done by markets.”

The platitudes concerning inequality coming out of Davos might be very soothing, but rather call to mind the Upton Sinclair line: “It is difficult to get a man to understand something, when his salary depends on his not understanding it.”

In this case, it is very difficult to get an elite to act on something, when their elitism depends on not acting on it. Until we see a philanthropist of the magnitude of Gates put his money, influence and intellect behind the problem of wealth inequality, it is likely inequality will get worse, not better.