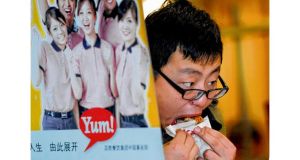 Consumers in Ireland are currently grappling with the unappetising prospect of burgers and lasagne made with horse meat, but Chinese punters have had a disproportionate amount of this kind of scandal in recent years, and are increasingly unwilling to put up with poor quality and lax food safety.

Hence the outrage following a report on the state broadcaster CCTV in December, which alleged that local suppliers had fed excess antibiotics and hormones to chickens supplied to the fried chicken restaurant KFC. Social media such as Sina Weibo went crazy, and there were calls for a boycott.

KFC has been an incredible success in China, as consumers cast aside hundreds of years of food tradition, including the legendary spicy Sichuan “gong bao chicken”, to embrace fried chicken of the “finger-lickin’” variety.

KFC’s first branch opened in China in 1987, and is by far the most pervasive symbol of western culture in China. Half of Yum!’s overall sales and operating profits are generated in China.

Yum! reported a 6 per cent drop in fourth-quarter sales at established restaurants in China due to “adverse publicity” on its poultry supply.

Last month, same-store sales in China dropped 37 per cent, including a staggering 41 per cent fall for KFC and 15 per cent for Pizza Hut Casual Dining. Yum! said it would have to revise its global earnings target for 2013 “significantly”.

The company is dealing with the problem by taking an aggressive tack. Yum! chief executive David Novak said the company would still be accelerating its development plans in China, and would open hundreds more outlets this year. He said it had tightened up its supply chain along lines suggested by the regulators.

“Although we cannot predict how long it will take to restore sales, we are steadfast in our belief that the power and popularity of the KFC brand in China will ultimately drive a full sales recovery,” said Novak.

It will be interesting to see if the Chinese consumer is prepared to forgive and forget.