National insurance contributions likely to rise, as could duty on alcohol 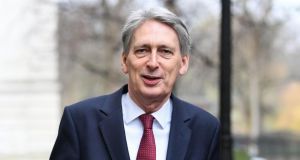 UK chancellor of the exchequer Philip Hammond. Mr Hammond is expected to offset any spending increases with higher taxes to achieve a fiscally neutral budget.

Britain’s chancellor of the exchequer, Philip Hammond, is expected to raise taxes in a budget on Wednesday aimed at preparing the country for possible shocks caused by Brexit.

The budget comes amid mounting anxiety over the future of British jobs in the car industry after the French PSA group announced it would take over the European operations of General Motors, including Vauxhall.

Mr Hammond is expected to offset any spending increases with higher taxes to achieve a fiscally neutral budget as he seeks to accumulate a war chest of tens of billions of pounds which would allow for fiscal easing if Brexit triggers an economic slowdown. The economy has performed better than expected since Britain voted last year to leave the European Union but Mr Hammond indicated this week that he saw no reason to increase spending.

“If your bank increases your overdraft limit, you don’t want to go and spend every penny in it,” he said.

He is likely to increase spending on social care and release more funds aimed at boosting British productivity, which lags behind its major European competitors. The chancellor is not expected to increase the rate of income tax but instead to raise the level of national insurance contributions paid by the self-employed and he is reported to be considering increasing alcohol duty.

The British Chambers of Commerce said on Monday that businesses were increasingly concerned about sterling’s exchange rate against other currencies and rising business rates. Business rates will be calculated differently from April 1st, leading to sharp rises for many small firms, particularly retailers.

The sale of Vauxhall has heightened fears about the future of Britain’s car industry after Brexit, particularly if, as expected, the country leaves the EU customs union. Vauxhall employs about 4,500 people directly in Britain, with a further 30,000 jobs dependent on the company’s manufacturing operations there. The contract to produce the Vauxhall Astra at Ellesmere Port in Cheshire runs out in 2021, and another Vauxhall contract at a plant in Luton expires in 2024.

Former business secretary Vince Cable warned yesterday that Vauxhall was especially vulnerable to the impact of a hard Brexit because it is so deeply integrated into European supply chains.

“Car components have to go backwards and forwards across frontiers and they will require tariffs and checks. Vauxhall particularly is exposed to this, about 80 per cent of its exports are to the European Union, most of its components are. If you are a hard-headed car executive looking at the competitiveness of Britain versus German plants, Britain I’m afraid is going to slip down the ranking in future,” he said.