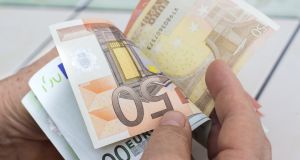 The organisation’s outlook comes days after the State’s Central Statistics Office said that a record 2.3 million people were working on the Republic. Photograph: iStock

Workers are in line for further pay rises as the Republic’s economy keeps growing, experts predicted in a report published on Thursday.

Its report predicts that unemployment will fall to 4.6 per cent in 2021 from 5.3 per cent this year.

The organisation’s outlook comes days after the State’s Central Statistics Office said that a record 2.3 million people were working on the Republic.

However, the OECD warns that competitiveness and productivity could suffer if prices rise as employers pass on higher wages.

It also recommends that the Government promote programmes to improve jobless workers’ skills to aid them in returning to the labour force.

The report cautions that uncertainty over the outcome of Brexit talks remains high while the risk that the UK could crash out of the EU without a deal is not eliminated.

“Similarly, further protectionist trade policies elsewhere could have a substantial and abrupt effect on the Irish economy, given its openness to global trade,” the OECD adds.

Around the world, the OECD says that geopolitical tension, trade conflicts, climate change and China’s sharper-than-expected slowdown, are undermining investment, jobs and incomes.

Laurence Boone, its chief economist, said that many threats to global prosperity were structural.

“Without co-ordination for trade and global taxation, clear policy directions for the energy transition, uncertainty will continue to loom large and damage growth prospects,” he warned.

1 Working from home: New costs, new stresses and little relief
2 Joint accounts: if one of us dies, can the other access the money?
3 We are ‘sale agreed’, but can we go back with a lower offer?
4 Investor alleges fraud over collapse in property fund value
5 HSBC board rethinks overhaul and seeks even deeper cuts
6 Airline stocks take off as coronavirus worries ease
7 DAA offers workers up to two years’ wages in redundancy plan
8 Fierce debate brews as EU Commission lays out recovery plans
9 Merck leaps into Covid-19 development fray with vaccine, drug deals
10 Electrical contractors fear closure under new pay law
Real news has value SUBSCRIBE