US should be added to tax haven blacklist, says EU report 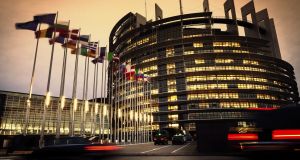 European Parliament building in Strasbourg, France: The report commissioned by the parliament’s Green group argues that certain US states “behave like tax havens” by not obliging financial institutions to provide information on the beneficial owners behind firms, allowing for the creation of shell companies. Photograph: Getty

The US should be added to a new European blacklist of tax havens being drawn up by the European Commission, according to a report commissioned by the Green group in the European Parliament.

The report, which is being published today ahead of a visit by the European Parliament’s special committee on taxation to Washington next week, is the latest sign of tensions between the EU and the US over taxation.

Noting that the US is a major financial centre, controlling around 20 per cent of the global market share of financial services for non-residents, the report claims that the availability of anonymous companies is widespread in at least 14 states.

The report argues that certain US states “behave like tax havens” by not obliging banks or other financial institutions to provide information on the beneficial owners behind companies and trusts, allowing for the creation of shell companies. Delaware, Nevada and Wyoming are among the states mentioned in the report.

It also criticises the US decision to implement its own FACTA (Foreign Account Tax Compliance Act) legislation rather than sign up to the OECD standards on the automatic exchange of tax information, which it believes allows the US to receive more information than it sends.

Tensions between Washington and Brussels over the perceived EU clamp-down on the tax affairs of US multinationals have intensified following the opening of European Commission antitrust investigations against US companies including Apple’s dealings with Ireland in recent years.

British MEP Molly Scott said the report shows that the US “fails to live up to the standards of global reporting that it requires of others . . .The evidence points to the US becoming one of the largest tax havens and the EU should not stand by and accept this.”

EU finance ministers are due to discuss a proposed common blacklist of tax havens at their next scheduled ecofin meeting in Brussels later this month. Previous attempts by the Commission to propose such a scheme have met resistance but the proposal has been given renewed impetus by the Panama Papers scandal which revealed how a global network made use of tax havens to hide their wealth.

Tax returns to the agenda at the European Parliament today when MEPs are due to debate new EU rules on the automatic exchange of information on tax.

On Thursday, senior officials in the parliament will decide on whether to set up a new committee of inquiry following the Panama Papers revelation.