Trends for US employment and inflation are in right direction, says rate setter 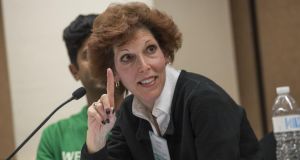 One of the United States Federal Reserve’s rate-setters has described the case for a further increase in short-term interest rates as “compelling”, arguing that the trends for employment and inflation are in the right direction.

Loretta Mester, president of the Federal Reserve Bank of Cleveland, said the US economy had “proven itself to be resilient through a number of shocks” which was why a gradual upward path for the federal funds target range was appropriate.

The Federal Open Market Committee (FOMC) member acknowledged there still might be negative risks looming overseas – for example, the slower Chinese growth rate and the aftermath of the Brexit vote – but she argued that the central bank also needed to recognise “upside” risks.

“If you inappropriately keep interest rates too low for too long then you put yourself in a position of perhaps having to raise interest rates more strongly in the future,” said Ms Mester, who votes on rates this year as part of the regular rotation between regional Fed presidents. “Those are the kind of risks we have to weigh . . . We have to be very deft about it.”

Her words follow a speech from Janet Yellen, the Fed chair, who signalled a rate increase was on the cards in the coming months.

Ms Yellen’s intervention at the Kansas City Fed’s symposium at Jackson Hole, Wyoming, came after a number of other Fed colleagues including Stanley Fischer, the vice-chair of the Federal Reserve board, and Bill Dudley, the president of the New York Fed, signalled they were open to a move. However, the minutes to the Fed’s July meeting suggested there were deep divisions among policymakers over how quickly to move.

Ms Mester was also attending the symposium at Jackson Lake Lodge. While second-quarter gross domestic product figures were soft at 1.1 per cent annualised growth, she argued that the consumer part of the economy was still quite strong, and employment was making progress.

In terms of what monetary policy can do with respect to maximising employment, “we are about there”, she argued. “I think that basically we are at the point where we have met that goal, and I think we are very close to meeting the inflation goal in terms of the path being up to 2 per cent over the next couple of years.”

Ms Mester declined to say what her decision would be at the Fed’s September meeting, saying she wanted to review all the economic data at that time and listen to her colleagues. But she added: “Making another gradual step – there is a compelling case for that.”

In a separate interview, fellow FOMC voter James Bullard of the St Louis Fed sounded ambivalent over whether a move should come as soon as September. Earlier this summer Mr Bullard switched to a dovish stance after his bank’s economists adopted a new approach to analysing the US. – (Copyright The Financial Times Limited 2016)