The great fall of China?

The Chinese stock market is surprisingly parochial, and its collapse may not have the global fallout many fear

China stocks gain for a second day, propped up by a barrage of government support measures, but worries remain over the impact of overall global market sentiments. Video: Reuters 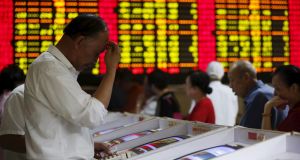 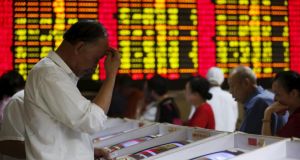 There were splashes of intermittent rain and the air was muggy around the Shanghai Stock Exchange on the Pudong side of the Huangpu River, but the climate was slightly less dispiriting than it had been for weeks.

After rising by 150 per cent in a year, China’s stock market had nosedived in the past three weeks, losing 30 per cent of its value and badly jangling the nerves of investors.

Many of the companies in Pudong’s Lijiazui financial district, home to the World Financial Centre, the tallest building in the city, are listed on the Shanghai bourse.

Retail investors account for a whopping 85 per cent of China trade, adding volatility to the mix, and adding fears of political fallout should a stampede mentality take hold.

One young man looked at his stock index Wechat page, and for the first day in weeks, the six indices on the app were in red, indicating that the markets were on the rise.

The Beijing government’s panoply of measures to give liquidity a boost and ease jangled investor nerves seemed to pay off, with the Shanghai Composite rising 5.76 per cent on Thursday afternoon and the Shenzhen market gaining 3.76 per cent.

But for the past few weeks, the slide in the markets has been frightening.

The bursting of the real estate bubble in China last year meant the money had to go somewhere, and it went to the stock market, as thousands of small investors ploughed their savings into the market, driving up valuations.

One of them is Katy Chen (24), a first-time stock investor about to pursue a business degree in Europe.

“Everybody was telling me how much money they raked in over the past six months, so I opened my stock account in April. I lost 50 per cent of the money that I invested,” said Chen.

“I blame myself for loading up on risky stocks without any previous knowledge. If even people like me are willing to bother themselves to dive into the market, it means there really is a bubble going on. I cannot blame anybody but myself.

“After the stock crash, I was very much worried about the renminbi depreciation so I bought some euro and dollars, in case anybody is shorting the Chinese economy. I was very much scared.

“I appreciate the government’s effort to rescue the market. I don’t really care if this is an open market or not, we have to get the market back on track first.”

Jakub Cai (27), a tax consultant at a big-four accounting firm, also jumped on the bandwagon.

“Now I am deep under the water. I do not want to sell at a loss, which means now I do not have money for the down payment. Hopefully the government will succeed in market rescue and get me out,” he said.

And then it did. More than 30 per cent has been sliced off the value of Chinese shares since mid-June. These statistics have caused alarm, especially at a time when people are already frantic at the possible impact of Greece’s financial woes.

The nearly €3 trillion losses on China’s share markets is 12 times as much as Greek’s total foreign debt.

Some investors are worried the Chinese share sell-off could have a more destabilising global effect than anything Greece can serve up. The fear for the global economy is that much of the investment in equities was borrowed cash, margin trading similar to the kind that pre-empted the Wall Street Crash of 1929.

Foreign banks have a lot of exposure here and the Bank for International Settlements (BIS) says that, between the end of 2012 to the end of June 2014, foreign lenders have issued $1.1 trillion (€990 million) to Chinese companies, making China the seventh largest borrower worldwide. Chinese nationals have borrowed more than $360 billion (€324.5 billion) through international debt securities, from both bank and non-bank sources.

“Contrary to prevailing wisdom, any vulnerabilities in China could have significant effects abroad through purely financial channels,” Claudio Borio, head of the monetary and economic department at the Swiss-based BIS.

As pointed out in the Economist, for all the lurid headlines, the stock market plays a surprisingly small role in China.

The free float value of Chinese markets about one-third of GDP, compared with more than 100 per cent in developed economies.

Less than 15 per cent of household financial assets are invested in shares – although that is of little consolation to those individuals who have chased the market in recent months.

To ease pressure on the markets, the government has suspended new share offerings, ordered brokerages to buy shares, forbidden large shareholders from selling stock, and promised to provide ample liquidity to keep the markets up.

There are wider concerns about the way in which Beijing intervened to support the market, as it casts doubt over the government’s pledge to introduce more market liberalisation measures – the centrepiece of its economic reform agenda.

The government’s move makes the A-Share market look rigged, and more broadly leads to suspicions that president Xi Jinping’s pledges to open up the economy may falter.

Analysts generally are more relaxed about the outlook.

Li Bo, chief investment consultant at Shanghai-based GF Securities, believes that he crash is just a normal part of the bull market.

“After this adjustment I believe the market will still remain bullish and reach a new peak, but in a slower fashion after the deleveraging. Liquidity in the Chinese economy is actually in very good shape. There is no shortage of liquidity. It is just the deleveraging that is making people nervous, and causing a fake liquidity strain. There is nothing to worry about the Chinese economy after the crash.”

“It is down 30 per cent so far this quarter. What melts up usually also melts down. There is very little reasoning for such a rally. There is not much to explain the selling,” said Tenengauzer.

Li Daxiao, chief economist at Yingda Securities, believes there are five reasons for the crash. Valuations were too high, the market is deleveraging, there was an increase in the supply of stocks, and unloading of shares by big shareholders and the market saw the emergence of a two-way trade pattern, with margin trading.

And he notes that most investors are still ahead on their investors. Only those who have piled in in recent months are nursing spectacular losses.

“We still have an 80 per cent increase compared with what it was a year ago. The stock market still has a very good effect in helping the real economy. It helped raise a lot of capital for the companies. We cannot deny the positive support it has to the real economy,” said Li Daxiao.

“The government is sparing no effort in market rescue. I would suggest to those who unloaded shares in the past three weeks that now is a good time to buy. They not only get a better deal after the crash, but also can stabilise their companies’ stock price. There is no need to panic now.”