Davos 2019: State refuses to sign up to EU plan 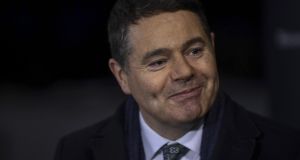 The Government, which has refused to sign up to an EU digital tax plan, will engage “fully” with the wider Organisation for Economic Co-operation and Development (OECD) as it looks to lay the foundations for an international tax on technology groups from as soon as next year, according to Minister for Finance Paschal Donohoe.

Speaking to reporters on the fringes of the World Economic Forum (WEF) in Davos on Friday, Mr Donohoe said he would oppose any effort to introduce a digital tax on sales, rather than profits. The minister also signalled that the reforms would need to look more broadly at the taxation of an “entire global economy that has become digitised”, rather than targeting a specific industry.

“We will play our full role in the OECD process as we did in the last process that looked at the issue of corporate that then led to the Beps process that we’re now implementing,” Mr Donhoe said, referring to the 34-member OECD’s base erosion and profit shifting (Beps) process to fight tax avoidance.

The OECD secretary general, Angel Gurria, said on Thursday that that officials in his organisation are working on laying the groundwork this year on a digital taxation plan, with a view to “implementation” of this from 2020.

The Minister said that any levy that “moves tax incidents completely away from where value is created to where consumption is occurred sets a precedent in corporate tax that as an exporting country we would be very opposed to and have grave concerns about”.

Secondly, the OECD process needs to be broad in scope, he said. “We do not have a digital economy, we have an entire economy that has become digitised. We will want to see the thinking in relation to the digital economy evolving inside the framework of existing taxation and that’s the way we are going to look to approach all of this,” he said.

A number of EU countries have decided to forge ahead with digital taxes at domestic level after the EU failed to reach an agreement before Christmas. While French finance minister Bruno le Maire said on Thursday that he was confident that member states would reach agreement by the end of March on the matter, minister Donohoe insisted on Friday that the process needed to be driven at OECD level.

“I’ve accepted that how we tax the digital economy has to evolve,” he said that the “whole world” needs to move together under the OECD, so as not to create “trading difficulties”.