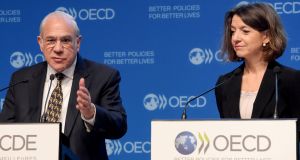 Britain would face a sharp economic hit in a no-deal Brexit scenario and should look to maintain the “closest possible” relationship with the EU to avoid a downturn, a major international organisation has warned.

The Organisation for Economic Co-operation and Development (OECD) said failure to reach a Brexit deal could wipe more than two percentage points from real gross domestic product over two years.

The think tank also urged the Bank of England to maintain “accommodative monetary policy conditions” if demand in the economy is impacted in a no-deal scenario.

The warning comes just a day after Bank of England governor Mark Carney and fellow policymakers reiterated to MPs that interest rates might have to rise in the event of a no-deal Brexit if the pound falls sharply.

But the OECD said growth was then set to slow markedly to 1.1 per cent in 2020, while its warnings on the impact of Brexit are stark.

It said: “The failure to come to a withdrawal agreement with the European Union is by far the greatest risk in the short term.

“The lack of details on the future relationship between the UK and the EU or the extension of the transition period, and the resulting uncertainties, could incite businesses to delay investment plans further.

“By contrast, prospects of maintaining the closest possible economic relationship with the European Union would lead to stronger-than-expected economic growth.”

The OECD also gave a more gloomy assessment of the global economic outlook, downgrading its 2018 and 2019 forecasts for growth in the G20 group of economies to 3.8 per cent and 3.7 per cent respectively.

It predicts overall world growth will remain at 3.7 per cent in 2018 and downgraded it to 3.5 per cent next year, with a particular warning over the mounting trade tensions between the US and China.

On slowing global growth, chief economist Laurence Boone added: “There are few indications at present that the slowdown will be more severe than projected. But the risks are high enough to raise the alarm and prepare for any storms ahead. Co-operation on fiscal policy at the global and euro level will be needed.” – PA