Embattled May fights on in bid to deliver Brexit deal 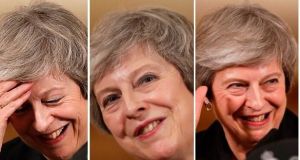 Theresa May reacts during a news conference at Downing Street in London.

Theresa May has defended her Brexit deal and dismissed speculation about her future after a number of her ministers resigned and more MPs moved to oust her.

She said she would go to Brussels on November 25th to sign off on the deal and put it to a vote despite the opposition of Brexiteers and pro-Europeans in the Conservative party.

“I believe with every fibre of my being that the course I have set out is the right one for our country and all our people,” she said.

The prime minister told a press conference in Downing Street that the European Union would not agree to any withdrawal agreement that did not include a Northern Ireland backstop.

But former Brexit secretary Dominic Raab cited the backstop, which includes separate regulatory rules for Northern Ireland, as the reason he could not accept the deal and was resigning from the cabinet.

Work and pensions secretary Esther McVey and two junior ministers also resigned and there was speculation at Westminster last night that environment secretary Michael Gove, who turned down the post of Brexit secretary, could be on the verge of quitting.

In a day of high political drama, the prime minister sat in the House of Commons for three hours as MPs from all parties denounced the draft agreement.

Eurosceptic Jacob Rees-Mogg said he no longer had confidence in the prime minister. He wrote to Graham Brady, chairman of the backbench 1922 committee, who must call a confidence vote if 48 Conservative MPs submit letters.

Conservatives were braced last night for the prospect of a confidence vote within days but Mrs May made it clear she would fight to remain in Downing Street.

DUP deputy leader Nigel Dodds confirmed his party, which has a confidence and supply arrangement with the Conservatives, will vote against the deal.

In Belfast, however, John Healy, vice-president of the Northern Ireland Chamber and managing director of Allstate Northern Ireland, said: “It is NI Chamber’s opinion that any deal is better than no deal for business.”

The mood in Dublin switched from delight at the conclusion of a deal that many saw as a victory for Ireland to concern for Mrs May’s prospects. Irish Ministers and senior officials said the Government would not agree to any substantive reopening of the agreed text.

The pound fell almost 2 per cent against the dollar in its biggest drop in two years, sliding 1.9 per cent against the euro. Irish stocks were punished more than any others in western Europe, while sterling fell to its lowest point in 17 months. The Iseq closed almost 4 per cent weaker, with stocks exposed to the UK economy among the biggest fallers. Bank of Ireland was close to 8 per cent weaker by the close, while Ryanair fell by more than 6.5 per cent.