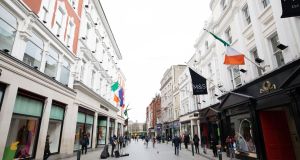 You might have been confused on Friday. On one hand we had the Irish economy growing at a near record rate of 11.1 per cent in the third quarter while unemployment data pointed to half of million people being out of work in November.

Stockbroker Goodbody, meanwhile, predicted that Ireland was on track to record the fastest GDP growth in the world in 2020, aided by pharma and tech exports.

A tale of two economies: one on the mend, the other mired in unemployment. Finding out what’s going on under the bonnet of the Irish economy can be difficult at the best of times, throw in a pandemic and two lockdowns and the fact that Government is effectively paying the wages of more than 600,000 workers, and it’s next to impossible.

Gross Domestic Product (GDP) figures published on Friday show the economy here rebounded strongly from the first lockdown, notching up double digit growth in the three-month period between July and September. This was hardly unexpected with activity in nearly all sectors springing back to life after the initial lockdown.

Activity in the hard-hit construction, distribution, transport, hotels and restaurants sectors grew by nearly 50 per cent with the easing of restrictions while the country’s perennially -strong exports delivered a trade surplus – the value of exports over imports – of €41 billion in the third quarter.

This was, of course, before the second wave of the virus hit and the second lockdown came into force, which separate figures showed left more than half a million people out of work last month.

The Central Statistics Office said the number of people receiving the Government’s Pandemic Unemployment Payment (PUP) rose by 2.5 per cent to 535,786 in November.

And remember this excludes the 300,000-plus workers whose wages are still being supported by the Government’s Employment Wage Subsidy Scheme (EWSS). The unwinding of these will reveal the true economic scar from coronavirus. For now, we’re in a state of suspended animation, buoyed by good news on the vaccine front and with the economic hit offset by strong exports.