Figure equates to over €44,000 for every man, woman and child in the Republic 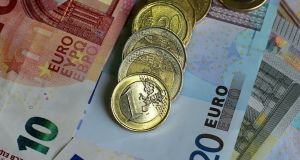 Costs of servicing the debt pile are considerable, €60bn in interest over the past decade. Photograph: Niall Carson/PA Wire

Whatever way you look at it, at €215 billion, Ireland’s national debt is massive and leaves us dangerously exposed if the global economy dips into recession.This equates to €44,365 for every man, woman and child in the State or nearly €90,000 for every worker in the economy.

The corresponding per-capita figure before the crash was €10,667, recorded in the first quarter of 2007.

While the multibillion euro figure equates to just 66 per cent of gross domestic product, this standard measure of national income flatters Ireland’s multinational-heavy economy. A better metric is debt-to-GNI* (the Central Statistics Office’s bespoke or deglobalised measure of gross national income), which puts our debt at more than 100 per cent of income.

The costs of servicing such a debt pile are considerable but the ultra-low interest rate environment has at least helped. In 2014, our annual interest bill was in the region of €8 billion, this fell to €5 billion in 2019 and is due to drop to €4.5 billion next year.

Head of the National Treasury Management Agency Conor O’Kelly revealed recently that the State has paid out more than €60 billion in interest on the national debt over the past decade, three times the amount paid in the previous decade. That’s a considerable sum when you consider the State’s annual health spend of just over €16 billion.

The problem with having a debt of this size is two-fold. First, when interest rates rise again the drag on the exchequer will be punitive. Second, if there is a major global downturn our ability to borrow and spend to cushion the economy from the likely fall-off in demand is limited.

There isn’t an economic report on Ireland that doesn’t caveat its findings with a warning about the size of our national debt. Highly indebted countries tend to be the first dominos to tumble in a crash.