Smart Money: The key points in the economic debate are highly contentious 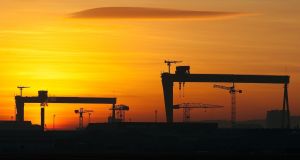 The North’s economy suffered substantially during the Troubles and did not recover strongly after the Good Friday Agreement. Photograph: iStock

We have yet to see how the negotiations on a new government will pan out, but having got the largest share of the popular vote, Sinn Féin is in a strong position. And it has made clear that a key issue for the party is stepping up preparations to make a push for Irish unity, including a public forum to discuss the issue and a government White Paper. So what are the big economic issues on what would clearly be a massive project?

This is of course, about history and politics, and not just economics . And while the politics will remain hotly contested, there is no consensus on the economics either, with one study presenting reunification as a no-brainer and others warning about the potential costs to taxpayers in the Republic.

1 Costa living: ‘Move home to Ireland? I’d hate it’
2 Anti-Irish bigotry in Britain has not gone away
3 Coronavirus: Almost 60 new cases recorded in Italy as two die
4 ‘I never truly understood what community meant until I moved to Donnycarney’
5 Steve Coogan: ‘Come Out, Ye Black and Tans is two fingers to the British’
6 30 great family holiday destinations in Ireland and abroad
7 A Dad with brain cancer: I was given 18 months to live, it put things into perspective
8 Do you have a Caroline Flack relationship with social media?
9 Ryanair’s Michael O’Leary under fire for comments on Muslim men
10 Archbishop: Sex abuse of women by L’Arche founder ‘reprehensible’
11 Fintan O’Toole: Irish voters' actions are not populist – just sensible
12 Would you kill one person to save five? Depends if you’re a millennial or not
13 Lithuanian man given until midnight on Saturday to leave Ireland
14 ‘We would go back in a heartbeat’: Readers share their best family holidays
15 David McWilliams: Germany needs a new business model
16 There'll be no Bauhaus in this White House
17 Social Democrats will not join government involving both ‘civil war’ parties, leaders say
18 Pat Leahy: Fianna Fáil and Fine Gael will not crawl off and leave McDonald the stage
19 England v Ireland preview: Ireland’s revival to face its sternest test
20 The view from Clondalkin: If Sinn Féin don’t get in, ‘there will be marches’
21 ‘I joked about swapping bodies’: The story of a trans couple in Sligo
22 Google completes purchase of Treasury Building for €120m
23 Varadkar resigns amid warning impasse will hit the economy
24 Weekend of floods, sleet and high winds in store as weather warning issued
25 Ben Affleck: ‘It took me a long time to admit I am an alcoholic’
26 Who turned up to the Dublin casting call seeking ‘bone thin, amputees, crooked teeth’?
27 A Chelsea winner's guide to creating a tranquil garden
28 Elisabeth Moss: ‘Something is actually wrong here and I’m not going crazy’
29 French new wave stay on course for Grand Slam
30 Paul Flynn: How to cook the perfect chowder – don’t use flour and keep it simple
31 Blue Brexit passports made by European firm to be issued from next month
32 Welcome to my place . . . Venice
33 Paul Mannion pounces as Dublin see off unlucky Donegal
34 Parties to continue talks with Sinn Féin despite Drew Harris’s IRA comments
35 Garda mobile contract win causes concern over Eir’s use of Huawei kit
36 Justin Thomas takes third-round lead as DeChambeau fades
37 Could a product from Lidl or Aldi change your life?
38 Jennifer O’Connell: Why are women in midlife so unhappy?
39 Irish pack must expose the weakness in England’s backrow
40 ‘I wouldn’t be here without it’: The importance of exercise to teenagers
Real news has value SUBSCRIBE