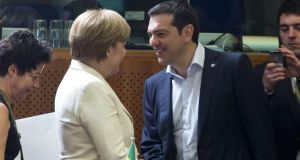 Signs of a possible breakthrough on the Greek impasse emerged from Brussels on Wednesday evening, amid reports that Germany was privately in favour of providing a staggered aid deal to Greece.

Despite indications earlier in the day that negotiations on Greece would not take place on the fringes of yesterday’s EU-Latin America summit, Greek prime minister Alexis Tsipras met German chancellor Angela Merkel and French President Francois Hollande on Wednesday night.

With talks commencing at 9 pm local time, there were signals from Berlin that Germany was prepared to offer a deal to Greece, despite continuing opposition from many within Angela Merkel’s CDU party towards granting Athens further aid without significant reforms.

Bloomberg reported that Berlin was willing to unlock badly-needed aid if Greece agreed to even one reform demanded by creditors, a position that was at odds with the tough stance taken by Germany publicly.

“The goal is, we want to keep Greece in the euro zone,” chancellor Angela Merkel said on arrival in Brussels. “Where there is a will, there is a way. “

Also arriving in Brussels for the summit, Taoiseach Enda Kenny warned that “time was running out” for Greece.

“Since the new Government was elected in Greece, at every European Council meeting there have been offers of support, encouragement and assistance from leaders around the table but time is running out here.”

He said that while that support and encouragement “still remains,” it was up to politicians in Greece to be “creative in the way they deal with the situation.”

“Obviously this can’t continue indefinitely... I know that there have been meetings arranged today between the prime minister and some of the principals of Europe and I do hope that a focus can be brought about on this and that a decision is made that will allow Greece to continue to play their part as a serious member of the euro zone. “

As talks continued on Greece, the European Central Bank in Frankfurt was said to have increased the level of emergency liquidity assistance (ELA) provided to the Greek banking sector. There were reports that the ECB agreed to increase the ELA provision to Greece by more than €2 billion, the biggest weekly hike since mid-February, bringing the total emergency cash being provided to Greek banks to more than €83 billion.

Despite deteriorating relations between the Greek prime minister and European Commission president Jean-Claude Juncker, the two met briefly ahead of the summit, and are expected to meet on Thursday for more formal discussions. Earlier a European Commission spokesman said the latest reform proposal presented by Greece on Wednesday, which contains new primary surplus estimates, “does not reflect” the discussions that took place between Mr Juncker and Mr Tsipras last week.

1 Google completes purchase of Treasury Building for €120m
2 Garda mobile contract win causes concern over Eir’s use of Huawei kit
3 Nineteen staff made redundant by Nama share €1m
4 Varadkar resigns amid warning impasse will hit the economy
5 A maverick taking on the Irish whiskey establishment
6 How can I view my dead brother’s will if I’m not the executor?
7 Appeals board grants planning for 354 Greystones homes
8 Billionaire Zara founder and German funds vie for prime Dublin offices
9 Will Avolon find itself on the block as China prepares to seize troubled parent HNA?
10 Should AIB compensate me for upsetting letter on arrears?
Real news has value SUBSCRIBE