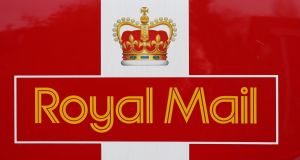 Many postal workers have now decided to hang on to their shares in the hope the price will recover. Photograph: Chris Radburn/PA Wire

For Britain’s postmen and women, the past few weeks have served as a crash course in the vagaries of the investment world.

In 2013, when Royal Mail was privatised, about 150,000 Royal Mail workers were each awarded a parcel of free shares. This giveaway – 613 shares for each eligible employee – represented 10 per cent of the company’s stock and was the largest-ever free stake of any major UK privatisation.

Royal Mail employees have watched anxiously as the price of their shares, floated at 330p, soared above 600p just a few months after their market debut, only to crash below 400p nine months later. While they were free to sell their shares at any point, any sale before the fifth anniversary of the float would have incurred a hefty tax bill.

Some Royal Mail staff sold straight away despite the tax, but many decided to wait until the anniversary, on Monday, before cashing in.

Their hopes were raised in May this year when a strong recovery in the shares saw them reach a new peak of 631p. Back-of-the-envelope calculations by the shareholder-workers brought dreams of near-£4,000 windfalls, and plans were made to splash out on holidays, new kitchens or to simply pay off debts.

A shock profit warning at the start of this month – just a fortnight before the fifth anniversary – put paid to those plans, however, as the shares crashed 30 per cent.

Disappointed employees accused Royal Mail of deliberately sabotaging their share sales by the timing of the profit warning, with union reps complaining that it was only human nature that many staff had already spent their windfalls in anticipation.

The company explained, of course, that under City rules, it was obliged to make its profit shortfall known to the market as soon as it became apparent.

Many postal workers have now decided to hang on to their shares in the hope the price will recover, and at least they’ll benefit from dividend payments in the meantime. Because of the sharp fall in the price, the shares are yielding a healthy 7 per cent or so, although there’s always a risk that the dividend could be cut if trading does not improve.

The mood of Royal Mail employees will not have been helped on Tuesday as they saw the company take a battering from MPs over executive pay at a session of the business committee in Westminster.

Rachel Reeves, chairwoman of the committee, blasted the group over its decision to splash out £5.8 million on a “golden hello” for its new chief executive, Rico Back. The average starting salary for a postal worker is £23,000 and such a sum “could have hired 252 postmen and women,” Reeves said.

“No UK tax was paid on this astounding multimillion pound deal,” she added, “a sum paid for by UK customers as they post their letters and parcels and an amount which would appal postmen and postwomen, and the wider public.”

The £5.8 million handed to Back – who commutes to work from his family home in Switzerland – is a world away from the employee windfall. With the shares now trading close to their original float price, at 350p, the value of their free shares has dwindled to a little over £2,000.

No bunting over earnings rise

The good news for British workers is that earnings are rising at their fastest rate in almost a decade. The bad news is this still leaves real wages £11 a week lower than they were before the financial crisis.

Figures yesterday from the Office for National Statistics showed regular earnings, which exclude bonuses, rose 3.1 per cent in the three months to end August. It’s the biggest increase since January 2009, and the seventh month in a row that wages have outpaced inflation.

A shortage of workers is behind the earnings increase – with unemployment remaining at a 43-year low of 4 per cent, firms are having to up their pay rates to retain existing staff and attract new workers. But after a lost decade on pay, unions are not exactly hanging out the bunting in celebration.

The TUC’s Frances O’Grady called on the government to use the budget at the end of the month to help workers.

While wages are at least moving in the right direction, there’s unlikely to be any meaningful increase in pay packets until some way is found to tackle Britain’s low productivity, as well as chronic underemployment, where workers are either in jobs they are overqualified for or not offered sufficient hours of work each week.

With so much else on his plate, the chancellor is unlikely to be able to do much about that in his budget.

1 The wealth of the Irish – how do your assets match up?
2 Irish company to test vaccines on volunteers deliberately infected with Covid-19
3 Dunnes Stores set to enter grocery delivery market
4 KBC Ireland fined €18.3m for ‘unconscionable’ tracker scandal role
5 Should I switch bank now with Ulster Bank at risk of closing?
6 Willie Walsh joins CarTrawler as deputy chairman
7 Will Facebook walk away from European market after data protection 'hissy fit'?
8 Air travel never going ‘back to way it was’
9 How to upgrade your home entertainment system for less
10 Dublin and Cork airports look at setting up pre-flight Covid testing centres
Real news has value SUBSCRIBE