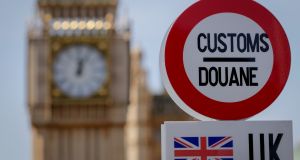 Chemicals and active ingredients would face tariffs on entry to the UK, should the talks fail. And new customs and VAT procedures would also kick in. Oliver Hoslet/EPA

Brexit is back. We have been preoccupied by the pandemic in recent weeks, but the Brexit threat to the economic outlook hasn’t gone away either.

Speaking in the Dáil on Wednesday, Minister for Finance, Paschal Donohoe warned of the risk from what he referred to as the “ interplay” between the economic impact of the pandemic and the UK leaving the transition period without a trade deal agreed with the EU.

Both coming together would be most unwelcome, providing a double whammy to the economy and a particular hit to rural Ireland.

All the signs are that the Brexit talks will now head towards another crisis in the autumn, after a likely inconclusive and unsatisfactory mid-year review.

As an analysis by BDO of the latest no -deal tariffs announced by the UK points out, this would leave the Irish food sector, particularly the beef industry, particularly exposed.

Other sectors also need to consider the implications – finished pharmaceutical items would be tariff free, but chemicals and active ingredients would face tariffs on entry to the UK, should the talks fail. And new customs and VAT procedures would also kick in.

This poses a big threat to exporters already trying to cope with the fallout from the pandemic. But despite similar problems for many of its own sectors, the UK government seems determined to push ahead – and not to seek an extension of the transition period.

Donohoe’s speech also pointed to another knotty problem. It accepts that further supports to business are likely, even as the income and wage supports are wound down at some stage. And that sectors like hospitality faced particular challenges.

But it also cautioned that the State “ will not keep unviable firms on life support”. With the changes brought by the pandemic, particularly longer term changes to demand in consumer-facing sectors, how viability will be defined is a very tricky question.

The question, as ever with Government schemes, is where the line will be drawn. And how do you judge whether a firm which is now not viable might face a better outlook in 12 months time? This has the potential to be hugely controversial.